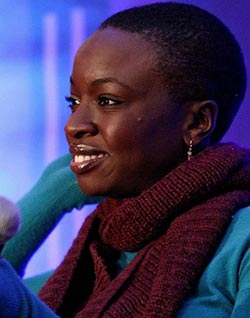 GROWING up in Zimbabwe and visiting South Africa as a young woman helped forge Danai Gurira’s passion for producing theatre in Africa.
As a young girl, she saw how females could be placed at the margins of society.
As a college student, she saw the power of artistic expression in South Africa, where creative people had been using theatre and other art forms to fight Apartheid.
“These sorts of experiences seeped into my soul,” said Gurira, a 35-year-old playwright and an actor on AMC’s “The Walking Dead.”
The mileposts from Gurira’s younger years are among reasons she continues to invest so much of her talent and energy into producing theatre in Zimbabwe.
One of her plays, “The Convert,” was performed last month at a high school in Harare. After one of the performances, she was moved when a young girl in the audience told her how much she loved the girl who played a leading role, Gurira said in an interview.
“That really touched me because I’m always about the idea of seeing a girl being up front and centre on the stage,” Gurira said. “You see her strength and her determination. And her life force on display is not something Zimbabwean girls see every day.”
Gurira plays swordswoman “Michonne” on “The Walking Dead,” which is filmed in and around the small town of Senoia. New episodes from the show’s fourth season resume airing February 9.
Gurira was born in Grinnell, Iowa, and moved to Zimbabwe – her parents’ home – when she was 5.
Her Zimbabwean parents were academics, she said, who believed in letting people learn to think for themselves and speak their minds.
She remembers her home in Zimbabwe being filled with books by Martin Luther King Jr., and a picture of the civil rights activist was displayed prominently on a mantle. King had signed the photo for Gurira’s mother, who met him when he gave a speech at her college, Illinois Wesleyan University.
Gurira returned to the U.S. when she was 19 to attend Macalester College in St. Paul, Minn. During her junior year, she had the opportunity to spend a semester abroad, in South Africa.
“It was at that time really that I decided to devote my life’s work to the dramatic arts,” she said, though she was still unsure of how, exactly, she would do that.
In December 2011, she co-founded Almasi Collaborative Arts, a non-profit that seeks to foster collaboration between Zimbabwean artists and American theatre professionals.Advertisement

A key goal is developing arts education for creative people in Zimbabwe. Its website includes the phrase “Kudzidza hakuperi,” meaning that “learning never ends.”
Gurira’s play “The Convert” is one of several Almasi projects. It’s set in 1895 in the part of Africa that would later become Zimbabwe. It tells the story of a girl forced to choose between her family’s African traditions and Western values that she’s embraced, according to a summary from Almasi.
When she’s not on the rural Georgia set of “The Walking Dead,” Gurira writes pieces for Almasi’s newsletter and Skypes with theatre professionals who partner with the group.
She also hears frequently from female fans of “The Walking Dead” who relate to her character on the show.
“A lot of girls approach me and say ‘you make me feel strong,’ ” she said. I get that a lot from girls. Women of all ages actually.”
Now, she says, she has high hopes that theatre can inspire people in Zimbabwe and help the nation’s young theatre professionals and the overall economy. Colleagues say she’s determined to carry that goal through.
“When she puts her mind to something, she is unstoppable,” said Mara Isaacs, an Almasi Collaborative Arts board member.
Gurira said she also wants to help tell the stories of African women.
That desire, she said, was ignited once again last month when the young girl in the audience in Zimbabwe told Gurira how she liked the girl in her play.
“I think it’s very important to encourage the Zimbabwean female voice to be as bold and as loud as it deserves,” she said.