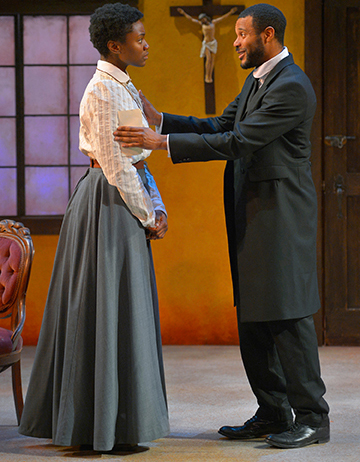 SOME people think a story needs to be mainstream to appeal to mainstream audiences but actress and playwright Danai Gurira doesn’t agree.
Growing up in Zimbabwe, she loved watching westerns, and she believes people can relate to any kind of story as long as it’s compelling.
“If a story is told powerfully and specifically, then anyone can connect to it,” she said.
“It’s very unfortunate if people have to see a story told by their own people in own time and place – then they’re not connected to their full humanity in a way.”
So Gurira finds it gratifying how American audiences have embraced her play, The Convert, now at the Marin Theatre Company.
Set in Zimbabwe (at the time Rhodesia) in the late 1800s, it tells the story of a Shona girl who gets out of a forced marriage by converting to Christianity, and becoming the student of a African evangelist.
Gurira who was born in Iowa before moving to Zimbabwe with her parents, says the issues in The Convert have always preoccupied her.
“It swims around you all the time- what of us is British and what of you is African,” she said. “I started to think more clearly about it when I started to write it.”
Gurira, who plays Michonne on the hit TV show “The Walking Dead,” got an MFA in acting at Tisch School of the Arts at New York University. While there she read George Bernard Shaw’s Pygmalion, which helped spark The Convert.
“It’s very adaptable to a colonial story about trying to make people better and hence more like themselves,” she said.
Gurira, who has won an Obie and a Whiting Writers’ Award got into playwriting because she didn’t see narratives that she wanted on stage.
So she had to create them herself. Stories of African women were under told and one-dimensional, she says.
In this play, the main character, Jekesai, who changes her name to Esther, is anything but. The role of the church in Africa is complicated, Gurira says, with some women fleeing to it because of dowry issues.
“People want to be simplistic about it, but it’s not,” she said.
“It made a helpful pathway for some type of emancipation for African women and some African men.
“My grandmother was the daughter of a chief who had several wives, and she wanted to go and learn through a Methodist ministry, and her father agreed, so she met my grandfather who was a Methodist minister.”Advertisement

Gurira, who recalls seeing people singing hymns in their own language while playing African instruments, says Christianity doesn’t have to erase who you are. But it can be a tool for colonization, she adds. Part of the impetus for The Convert was to explore her own identity.
“I wonder who I would have been if I’d been born in 1878 versus 1978,” she said. “I think I would have been a woman with some fire in my belly.”