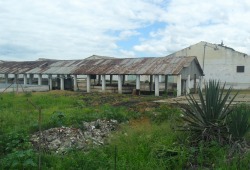 LIEBIG’s meat canning factory in West Nicholson is now in a derelict state, resembling ruins, a visit to the Matabeleland South-based plant revealed on Monday.
The formerly magnificent factory, once regarded as one of the biggest meat canning factories in Africa, is now an industrial dinosaur and an object of scorn for many.
Former workers who spoke to NewZimbabwe.com shared their thoughts on the state of the fallen giant.
“I worked at the meat canning factory for seven years before it was closed. Since the closure of the factory, I have not been formally employed. Whenever I pass through the factory, I feel like crying because this factory used to sustain our lives,” said Hebert Banda.
In its days of grandeur, Banda said, the company employed over a thousand workers as hundreds of cattle were slaughtered each day.
“We used to have a lot of ranches in this area which supplied the factory with cattle. A lot of people were also employed in the ranches. Some white farmers were even bringing their cattle from as far as the Midlands,” recalled Banda.
Banda, who has got six children, still stays in one of the houses at the factory‘s compound.
Another former employee at the factory, Godfrey January, is also nostalgic about the good old days when the factory was the pride of the province.
“I used to work in the boning department as a general worker. The company used to provide everything for us including maize meal every month. Things started deteriorating after the 1992 drought when large numbers of cattle in the province were wiped out by disease and thirst.”
He added: “Again during this period a lot of white farmers sold their cattle and farms because this is the time when government started talking about land acquisition.”
January is of the many former plant workers who are now gold panners in the area.
Grills Group, who shut the company when the economy started biting, has been trying to sell the company but no one seems interested in the project.
“No serious investor can ever buy or start a business of this nature at the moment. For starters there are no cattle to sustain the project. All the major cattle producing ranches were taken away by government under the land reform programme,” said Michel Randels, a former cattle rancher who is now running a service station in Gwanda.Advertisement

Randels said it will take years for the country’s beef industry to recover.
According to a recent livestock assessment programme carried out by the Ministry of Agriculture, Matabeleland province, once the country’s biggest cattle producer before the land reform, has more donkeys than cattle.
Matabeleland’s livestock population has been on a steep decline over the years owing to the land invasions and recurrent draughts.
There have been allegations that some Zanu (PF) officials, including known CIO bosses who run butcheries in the province, looted thousands of cattle from white owned ranches during the chaotic land reform programme.