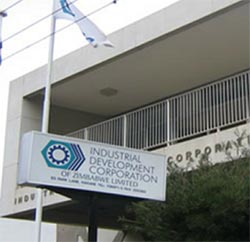 GWERU based Zimbabwe Glass Industries (Zimglass) is failing to resume operations since it was placed under voluntary judicial management in July last year, NewZimbabwe.com has established.
The country’s sole flint glass manufacturer, which is owned by Industrial Development Corporation (IDC), was placed under judicial management due to the lack of working capital.
The company had also been weighed down by a debt amounting to $30 million and requires close to $5, 5 million to resume operations.
When the NewZimbabwe.com visited the company’s premises last Friday it was deserted with only 12 security guards at the site safeguarding the remaining company’s assets and some auditors taking stock of the firm’s equipment.
Though Zimglass acting chief executive officer, Gilbert Tapfuma was not available for comment, he recently said the company was in the process of negotiating with its major customers to buy shares to raise capital to resume operations.
Major customers include African Distillers, Datlabs, Olivine Industries and Mutare bottling.
The company is reportedly courting a Tanzanian firm to sell to it stockpiles of broken glass (cullet) in a bid to raise capital.
Zimglass was shut down in September 2010 to allow refurbishment after it had secured $7 million from the IDC but since then has been struggling to get back on its feet.
The company owns its 472 workforce in outstanding salaries that dates back to 2010.
“We have no hope that this company will be back on its feet soon but chances of getting what we are owed is remote,” said one worker who preferred not to be named.
Another worker said they (employees) felt “let down by management who seem to be clueless” on reviving the company.
Gweru has seen a number of major companies closing down in the last few years citing viability problems.
They include Radar Castings, Zimcast, Zim Alloys, David Whitehead, Kariba Battery Manufacturers, BOC Gases and Swissete Garments.Advertisement