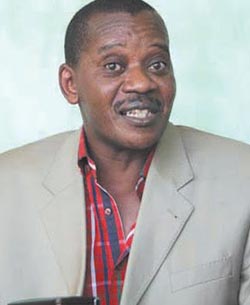 HARARE City football club chairman Leslie Gwindi has been found guilty on charges of bringing the game into disrepute by Zifa’s disciplinary committee.
Gwindi appeared before the committee on 20 December last year over allegations he verbally attacked Zifa, the Premier Soccer League (PSL), Delta Beverages who sponsor the league through their Castle Lager brand.
He is also said to have attacked former Warriors coach Klaus Dieter Pagels from Germany as well as the then minister of education, sports arts and culture David Coltart while addressing a Bulawayo Press Club last March.
The Harare City football club chair, who is also seeking to challenge incumbent Zifa president Cuthbert Dube in next month’s plebiscite, has however been found guilty of bringing the game of football into disrepute.
Gwindi, who had brought in former Zifa president Leo Mugabe and vice president Vincent Pamire and Motor Action Football club director Eric Rosen as witnesses admitted uttering the alleged comments but stressed that they were merely an expression of an opinion given in the spirit of trying to help improve the game.
He said the utterances complained of by Zifa were in line with the right conferred on him by the constitution of Zimbabwe to express an opinion, which opinion constituted a fair comment in light of the fact that Zifa, Delta, Pagels and Coltart were not sacred cows.
He argued they should accept criticism.
Zifa were represented by PSL chair Twine Phiri and Zifa vice president Ndumiso Gumede at the hearing.
Phiri said he was eventually summoned to Delta where he was asked by the marketing director Max Karombo if PSL still wanted the Delta Sponsorship following the comments by Gwindi.
He stated that he had told the Delta executive that they still wanted the sponsorship and had apologized. He further stated that Delta wanted to know what action the PSL would take.
“Having gone through the evidence adduced in this matter, I am convinced that (Gwindi) used bad language likely to bring the game of football into disrepute. Accordingly, I find the respondent guilty as charged,” read part of the ruling by Wilbert Mandinde.
Andrew Musengezi concurred. “I wish to add that the statements by the respondent were objectionable.
“They were a direct attack on the current Zifa board to which we heard evidence that the respondent contested in the last elections and lost. The next elections are due in March 2014.Advertisement

“There is nothing we find in the press releases which was calculated to promote football. It is an insult to publish in a newspaper or newspapers that a coach who Zifa fortuitously found available to assist the national team would be labelled ‘a tourist who had come to Zimbabwe to enjoy the Victoria Falls’.
“That with respect is an insult and cannot qualify as a ‘fair comment’ because Pagels did not come to Zimbabwe as a tourist at all. And to suggest that the Zifa board has ‘no brains’ cannot be a ‘fair comment’.
“That is an insult directed at the mother body of football in this country. And that coming from a football administrator seeking glory through the press cannot be condoned. I agree that the utterances did or were likely to bring the game of football into disrepute.”
Zifa recently fired its technical director Nelson Matongorere for masquerading as Warriors captain in the Ballon D’Or vote.