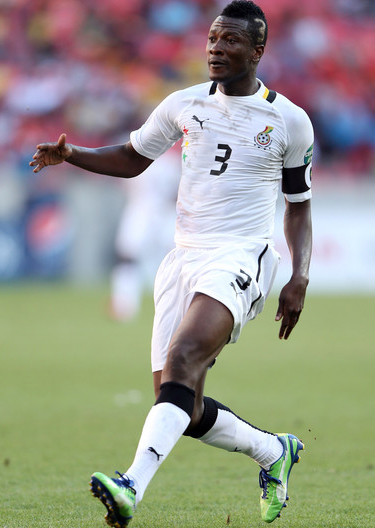 GHANA striker Asamoah Gyan has flown from one end of Equatorial Guinea to the other for a scan on an injury that makes him doubtful for Thursday’s African Nations Cup semi-final against the hosts.
He travelled on Monday from Malabo to Mongomo, where the only MRI scanner in the small country is located, after being kicked in the stomach by Guinea goalkeeper Naby Yattara in the closing stages of Sunday’s quarter-final.
“We are awaiting the results before a decision can be made on whether he plays (in Malabo),” said team spokesman Ibrahim Sannie on Tuesday.
Ghana coach Avram Grant has called for Yattara to be slapped with a heavy ban after his kung-fu style lunge at Gyan who had broken free of the Guinea defence and was racing down on goal before being poleaxed.
Yattara was sent off but not before he also landed a punch on Ghana defender Jonathan Mensah who had gone to remonstrate.
“I’m frustrated because what he did is not acceptable,” said Grant. “He tried to hack Gyan in the last minute of a match we were already leading 3-0 — it’s a bad injury.
“If you hack someone deliberately in the stomach it means you possibly want to end the career of the player.
“It shows you do not respect the game and you do not respect those who play against you. When I saw it again on the TV replay I saw it was terrible,” added Grant.
It has been an eventful tournament for Gyan who missed Ghana’s first game against Senegal and climbed out of his malaria sickbed to score a stoppage-time winner in the second match against Algeria.
Ghana have since beaten South Africa and Guinea to reach the semi-finals for the fifth successive time.
Ivory Coast take on the Democratic Republic of Congo in the other tie in Bata on Wednesday.Advertisement