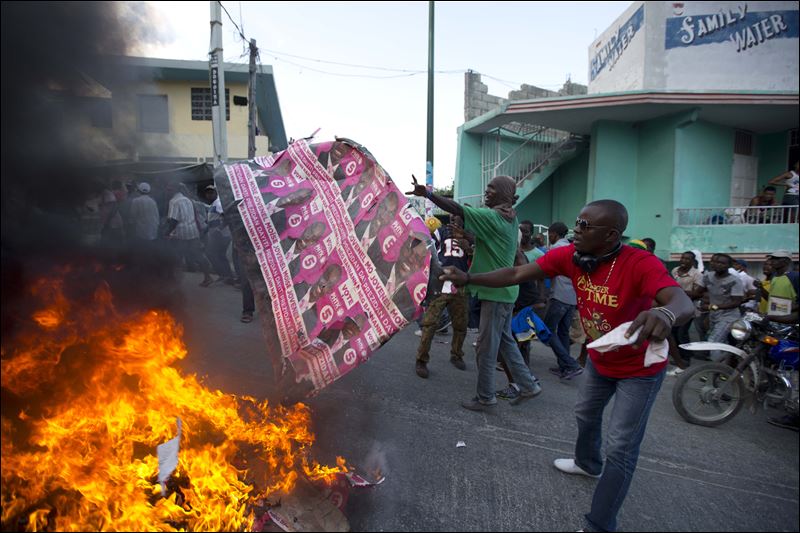 Opposition protesters have returned to the streets of the Haitian capital, Port-au-Prince, as the government vows to deepen the investigation into allegations of corruption and implement economic measures.

Demonstrators burnt tyres and set up barricades in some streets on Sunday.

At least seven people have been killed in the country since the protests began earlier this month.

Protesters are angry at soaring inflation and demand an independent investigation over claims that officials and former ministers misappropriated development funds from an oil deal signed between Caribbean countries and Venezuela, the PetroCaribe.

The demonstrators have demanded the resignation of President Jovenel Moise, in power since 2017, who has also been accused of involvement in irregularities.

But last week he rejected calls for his resignation, saying he would not leave the country in the “hands of armed gangs and drug traffickers”.

Haiti is the poorest country in the Americas and 60% of the population live on less than $2 (£1.56) a day, according to the World Bank.

The Caribbean nation was devastated by a powerful earthquake in 2010 that killed more than 200,000 people.

Then in 2016, Hurricane Michael hit, killing some 3,000 people and badly damaging the country’s infrastructure. Thousands of residents were displaced.

In an address on Saturday, Prime Minister Jean-Henry Céant announced measures including a 30% reduction in government’s expenses and the removal of privileges – such as allowances for petrol, and telephones and trips abroad – for government officials.

He also vowed to continue with the investigation into the alleged irregularities involving PetroCaribe funds.

Thousands have joined the demonstrations that have plunged Haiti into political crisis and paralyzed everyday life in the largest towns.

New protests were expected this week and  Céant warned of the risk of a humanitarian crisis.

Since the protests broke out on 7 February, several foreign governments, including the US and Canada, have urged citizens to avoid travel to Haiti and ordered the departure of non-emergency personnel.