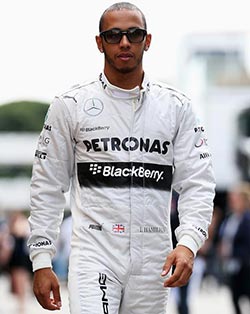 LEWIS Hamilton says he has spoken to Formula 1 title rival Nico Rosberg following their falling out at the recent Monaco Grand Prix, and says they are still friends.
Tension between the two Mercedes drivers has been rising since the Spanish Grand Prix earlier this month, where Hamilton reportedly used a more powerful engine mode to repel Rosberg’s attack for the win late in the race, forcing an apology from the Briton afterwards.
The relationship between the two team-mates broke down further at last weekend’s Monaco GP, where Rosberg took the escape road at Mirabeau in the dying moments of qualifying, bringing out yellow flags and denying Hamilton the chance to snatch pole.
Hamilton insinuated that Rosberg did this deliberately and refused to speak to his team-mate on the podium after finishing second to him in the race, leading to criticism from Mercedes executive Niki Lauda.
Mercedes has moved to play down comparisons of the rivalry to the bitter feud between Alain Prost and Ayrton Senna in the late 1980s and early ’90s, and Hamilton said he had since spoken to his team-mate to clear the air.
Posting a picture on Twitter of the two on unicycles from their younger days, Hamilton said: “We’ve been friends a long time, and as friends we have our ups and downs.
“Today we spoke and we’re cool, still friends #noproblem”.