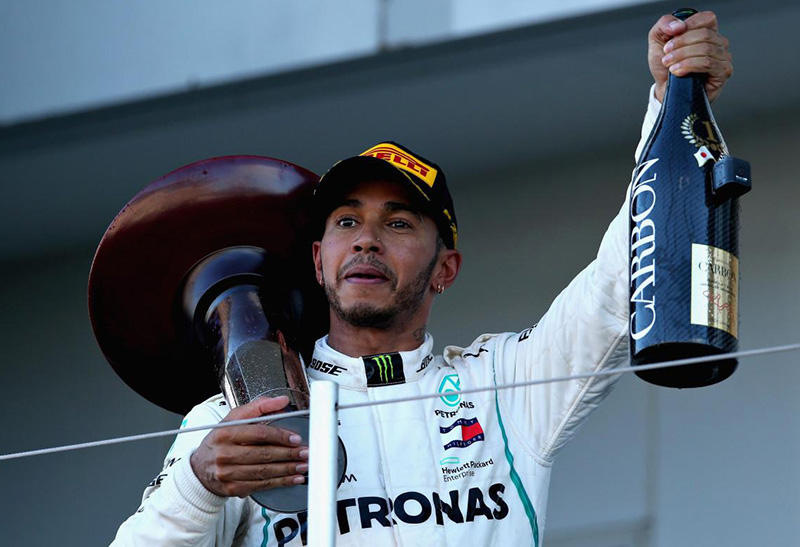 A rampant Lewis Hamilton led a Mercedes one-two at the Japanese Grand Prix on Sunday to move to the brink of a fifth Formula One world title.

The Briton dominated at Suzuka after starting on pole, stretching his lead over Ferrari’s Sebastian Vettel to 67 points with just four races left as the German’s hopes were dashed by a collision with Red Bull’s Max Verstappen.

Valtteri Bottas held off Verstappen to take second almost 13 seconds behind Hamilton in a breathless 53-lap race at the fast-flowing Japanese circuit.

“Woo-hoo! I love you guys!” Hamilton screamed over team radio after his sixth win in the last seven races and fourth in a row.

“I hope you guys are not getting bored of this — because I’m definitely not.”

Vettel realistically needed to win to keep alive his fading title hopes but, despite making up four places in a frantic start after starting on the fourth row, spun off on lap eight in a shower of sparks after a risky lunge on Verstappen.

The German, who began from eighth in qualifying, survived the scrape but found himself back in 19th and could only finish sixth, dealing a hammer blow to his slim title hopes.

After posting his 71st career victory and his 50th with Mercedes, Hamilton will retain his world title if he wins the next race at Austin and Vettel finishes lower than second.

“It’s a great one-two for Mercedes and a true showing of the strength in depth we have,” said the Briton after his fifth Japan victory and ninth of the season.

“I can’t wait to unleash this beast in Austin,” he added, pointing at his car.

“It’s really weird -– obviously I have been racing a long, long time, but the happiness I have inside is as high as always.

“We’ve gone from strength to strength this year as a team but honestly I’ll take it one step at a time.”

Vettel was left wondering what might have been after a ruining an electric start with an ill-advised attempt to duck inside Verstappen at turn 13.

“In that corner you can’t overtake,” shrugged the Dutchman, who had earlier received a five-second penalty for nudging Raikkonen off the track.

“I even gave him space but he under-steered into my car.”

Hamilton screamed over team radio: “I hope you guys are not getting bored of this — because I’m definitely not”

“You know with Max, he’s never going to give an inch and it’s cost Sebastian dear today,” he said. “That’s probably the end of his championship.”

“The gap was there, I had the inside,” he fumed. “I had the speed. I made the corner and then he didn’t give enough room and we touched.”

Further down the order, Sergio Perez took seventh for Force India ahead of Romain Grosjean’s Haas.