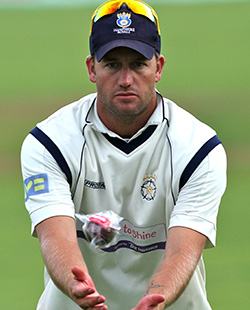 SEAN ERVINE has been named Hampshire’s limited overs captain in the absence of James Vince who is on England Test duty.

After arriving at Hampshire from Zimbabwe ahead of the 2005 season, Ervine made his debut in April of that year and has gone on to make over 400 appearances for the club.
The 33-year old, who is the club’s beneficiary for the 2016 season, will lead Hants in the NatWest T20 Blast and Royal London One-Day Cup while Vince is away on International duty.
Ervine said: ‘It feels great to be captain.
‘While we’re disappointed Vince can’t be with us, it’s brilliant he’s been selected for England.
‘I’ll bring calmness, and try and use my experience from over the years to counter certain situations – it can get quite manic out there.’
Ervine will be looking to follow the examples set by former captain Jimmy Adams and Vince.
He added: ‘I captained in Barbados during pre-season and I really enjoyed the experience.
‘Jimmy has been a brilliant example and Vince has done an amazing job.
‘It’s just about making sure we continue the success we’ve had.’
Ervine’s first competitive match as Hampshire skipper will be the visit to Uxbridge for the T20 Blast match against Middlesex on Friday, May 27.Advertisement