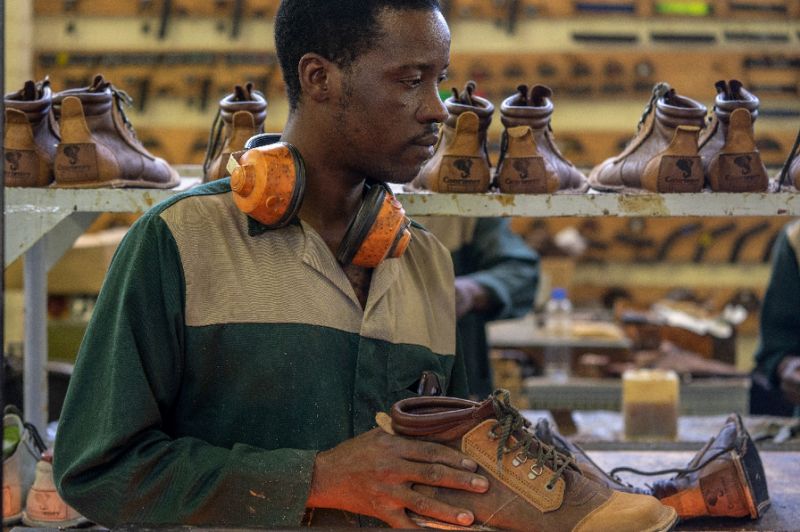 IN a tiny factory producing handmade boots and shoes in southwestern Zimbabwe, leather cutter Misheck Sibanda is on another hectic shift as he tries to keep up with soaring global demand.

Orders are piling in and new workers are being recruited at the Courteney boot company — that seems to defy all the odds as Zimbabwe is battered by decades of economic misery.

Founded in 1993, the firm has recently ramped up production to just 30 pairs a day, all of them made meticulously by 14 employees in a one-room workshop in the second city Bulawayo.

The city — a former industrial hub — has suffered the brunt of the country’s collapse since 1980 that has left behind mass unemployment and a landscape of derelict warehouses and ghostly abandoned factories.

But in one unmarked brick building, Sibanda uses his sturdy cutting machine to press shapes out of locally produced leather skins at the start of a process that turns out boots selling for between $140 and $500 a pair.

“We sell internationally — to the first world, even though we are a third-world country. That alone makes me smile,” Sibanda said, deftly handling the soft leather skins.

“People are tired of manmade materials, they want natural products like ours.”

Sibanda and his colleagues are behind an unlikely business story based on a skilled workforce, traditional methods and decades-old stitching machines to produce classic outdoor boots and shoes.

Prized by a small band of aficionados, Courteney boots have soles made from natural tree rubber — imported in blocks from Malaysia — and uppers made from the hides of Zimbabwe game such as buffalo, kudu, wildebeest and crocodile

Prized by a small band of aficionados, Courteney boots have soles made from natural tree rubber — imported in blocks from Malaysia — and uppers made from the hides of Zimbabwe game such as buffalo, kudu, wildebeest and crocodile.

Using only hides approved under the international CITES conservation regulations, it also makes boots from ostrich, impala and even hippopotamus.

“Wild, free-range leather does more to preserve the natural environment than cattle ranching,” the company says.

The same 15 basic designs have been unchanged for years, eschewing the fickle trends of fashion except for a few colourfully dyed women’s boots.

Exporting mostly to the United States, Europe, Britain and neighbouring South Africa, the boots are paid for in precious US dollars — the key to survival in Zimbabwe’s economy as it lurches downwards.

The country, hammered by hyperinflation 10 years ago, is again being roiled by a currency crisis, government mismanagement and fuel shortages.

Many businesses have folded and investors have fled over the last 20 years, but the Courteney Boot company is rushing to keep up with orders.

Several employees come from local shoe-making families, including fathers, brothers and sons, with youngsters learning the trade at home using offcuts from the factory bins

Each shoe can take up to two weeks to make, and three extra staff were employed last year to boost output.

“We asked our current long-serving staff to select the new ones,” said manager Helen Emerick in the factory amid smells of leather, hot rubber, glue and machine oil.

“They know exactly what skills are needed and how much hard work it takes. They want the company to grow and we want a happy team.”

Several employees come from local shoe-making families, including fathers, brothers and sons, with youngsters learning the trade at home using offcuts from the factory bins.

When violent protests against Zimbabwe’s economic woes erupted last month, almost all businesses closed down for a week. But the Courteney factory stayed open. “We had a lot of orders to get done!” says manager Helen Emerick

When violent protests against Zimbabwe’s economic woes erupted last month, almost all businesses closed down for a week.

But the Courteney factory stayed open, working shorter days so that staff could get home safely.

“We had a lot of orders to get done!” Emerick said.

“The biggest challenge now is regular power cuts. We have to use our generator and make sure we have enough fuel.

“We do it the old-fashioned way — there’s no laser cutting here.”

The company is named after Frederick Courteney Selous, the legendary explorer and hunter who died in 1917, and it is still owned by Gale Rice, widow of its founder John Rice.

In Bulawayo’s colonial-era city centre, Jay Giga, owner of a menswear store on Robert Mugabe Way, says he waits impatiently for each new batch of supplies.

“A guy from South Africa came in yesterday and bought nine pairs for him and his friends,” Giga said.

“I sell them as fast as I can get them in. We are always asking them to make more.”

Back on the production line, Sibanda says that he expects Zimbabwe’s renewed troubles to test the company to the limit in the years ahead.

“It is so difficult here,” he said. “But we are going to survive because we are unique”.