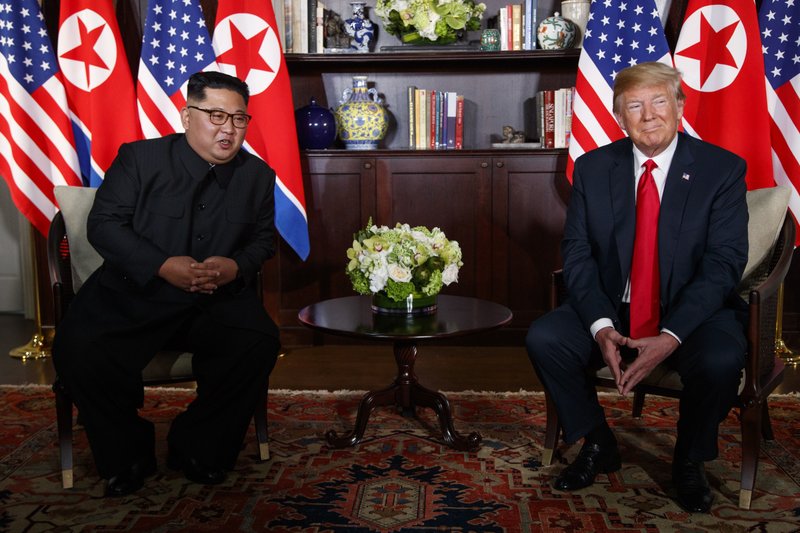 DONALD Trump’s handshake with North Korean leader Kim Jong Un in Singapore on Tuesday marked a historic moment — the first meeting ever between a sitting US president and the leader of North Korea.

The US president’s often-awkward handshakes with world leaders have sparked ridicule but many hope the one with Kim — the culmination of months of dramatic diplomacy — will lead to durable peace on the Korean peninsula.

Here are some other handshakes that shook the world:

On April 27, 2018, as the world held its breath, Kim Jong Un and Moon Jae-in reached across the Military Demarcation Line that divides the two Koreas and shook hands, the result of a remarkable thaw on the peninsula sparked by the Winter Olympics earlier this year.

The Kim-Moon summit was the result of a remarkable thaw on the Korean peninsula, sparked by the Winter Olympics

Kim then stepped over the border for a summit with the South Korean president, making him the first leader from Pyongyang to set foot in the South since the Korean War ended in an armistice 65 years ago.

The two leaders agreed to pursue permanent peace and the complete denuclearisation of the divided Korean peninsula.

At a memorial service for Nelson Mandela on December 10, 2013, US President Barack Obama made headlines when he shook hands with Cuba’s Raul Castro, the first such public greeting between leaders of the bitter neighbours after decades of enmity.

Within months there was a rapid thaw. Full diplomatic relations were restored in July 2015, followed by once-unthinkable steps to mend ties.

Obama visited Cuba in 2016 — the first such trip by an American president in 88 years.

Washington also relaxed its decades-long embargo on the communist-ruled island, and US airlines resumed direct flights to Havana in November 2016.

In a landmark moment in the Northern Ireland peace process, Britain’s Queen Elizabeth II met Martin McGuinness, a former top commander in the paramilitary Irish Republican Army during the many years of bloody hostilities with British forces.

The IRA wanted an end to British rule in the province, and for it to be merged with the Republic of Ireland. McGuinness later became one of the figures that helped negotiate an end to the violence.

Then a deputy first minister of Northern Ireland, McGuinness shook hands with the Queen during her June 27, 2012 visit to the province.

It was a gesture towards reconciliation that would once have been unimaginable, with McGuinness’ militant past and British security operations still a source of anger for many.

After months of secret negotiations in Norway, Israeli Prime Minister Yitzhak Rabin and Palestinian leader Yasser Arafat stood in the South Lawn of the White House on September 13, 1993 to witness the signing of the Oslo Accords.

And then, in one of the most dramatic moments in the Israeli-Palestinian conflict, with US president Bill Clinton’s arms stretched around both leaders, Arafat and Rabin shook hands.

The abortive process granted autonomy to the occupied Palestinian territories without creating a separate state.

Rabin was assassinated two years later by a Jewish extremist opposed to the peace process, which faltered in the years that followed.

In what is widely considered a major turning point in the recent history of the Middle East, Egyptian President Anwar Sadat arrived in Israel on November 19, 1977 on a historic visit — the first by an Arab head of state to the Jewish nation.

Images of Sadat shaking hands with Israeli Prime Minister Menachem Begin during the visit were transmitted around the world. The visit led to the first Arab-Israel peace treaty and the formal end to the state of war that had existed between the two countries for 30 years.

Sadat paid for it with his life: he was assassinated by Islamists in 1981.