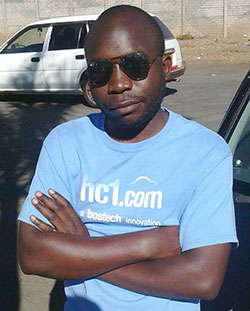 IT has always seemed to be a preserve of the Chimbetu family and nobody else. After all, and in all fairness, Dendera does seem to have all the sophisticated DNA of its creators and therefore cannot be replicated by anyone else; it is that sophisticated.
Patented with the Chimbetu genes, many who have been brave or daft-enough to try their hand at Dendera have ended up as failures.
Like the patented ingredients to Coca-Cola, the art of Dendera seems to reside in some vault underground that only few have access to.
But now, Saviours Mawere, without the scantest relation to the sacred Chimbetu bloodline, has ventured where even daring people like Christopher Columbus and Vasco Da Gama, with all their love for exploring, would not dare tread.
Mawere has taken up Dendera as a music of interest with the unleashing of his album entitled Stories In Chapter One, with his backing group, the Super Black Guides. And a darn good job he has done of it too!
“I just love the art of Dendera and have always wanted to play that kind of music,” said the self-confessed multi-preneur. Multi-preneur because he confesses he isn’t a musician only but is a Jack of multiple trades and wishes to be master of them all!
“I think Dendera is a music type that can be played by many people just like sungura and not specifically the Chimbetus who gave that music to us. I feel it is a mark of respect to also carry the Dendera music genre forward. It shows we appreciate what the Chimbetus gave us both the living and those legends that have passed on,” he says.
And unlike many who enter Dendera in a combative mode in a bid to silence the trailblazers and existing ‘Denderanista’ like Sulu, Tryson and Douglas, Saviours is here not with any arsenal directed at mortal combat. Friend or foe? Friend, definitely!
“I want to complement the Chimbetus and not to start any form of Dendera war. I appreciate the music of Sulu and have quite a lot I can learn from the current Dendera artistes. I do not even play the classic Dendera that they play but a rather mild toned form,” he says.
And the product he has unleashed is testament to that.
Just the first incision his music makes on the ears tells you that here is someone who has taken his time to create a Dendera monster; a masterpiece and crème de la crème of debut Dendera albums is what he has breathed upon.Advertisement

The musical arrangement and that unmistakable sound of Dendera is enough to tell the ardent connoisseur that here is a new Orion in the galaxy of extraterrestrial luminaries no doubt.
His vocal prowess puts paid to any questions of a start up. He is the real deal and his music, created at the iconic Mosi-Oa-Tunya studios, is well polished and respectfully so for his listeners. It has already started turning heads but Saviours has resisted efforts to get him on the live circuit just yet.
“I have been asked to do live shows but I am taking my time. I am a perfectionist and do not want to be rushed into something I am not ready for. When it happens it will have to be a vintage performance after vintage performance not just live shows for the sake of live shows,” he says.
And yet this young man, who has entered uncharted regions of the universe of music with an aim at becoming a recognised star, has all but managed to perfectly tread the first step.
He is somebody pundits no doubt need to keep in their sights. Otherwise the cry later on will be “we never saw this gem coming” but he will have outshone the galaxy.
Hits to look out for on his album include Roora, Baba Mwana, Musandikanganwe and Girlfriend, all penned from the traditional Dendera themes of love, family, relationships and other social issues.
“I chose themes that related to everyday life because Dendera is everyday music,” he confesses.
It may be too early to conclude, but with his hand, Saviours Mawere is no doubt out to write his own unique chapter in the Dendera music story.
And with a title like Stories In Chapter One, it is pretty evident that this young man is destined to write more chapters and does not intend to be a one album dazzler at all!