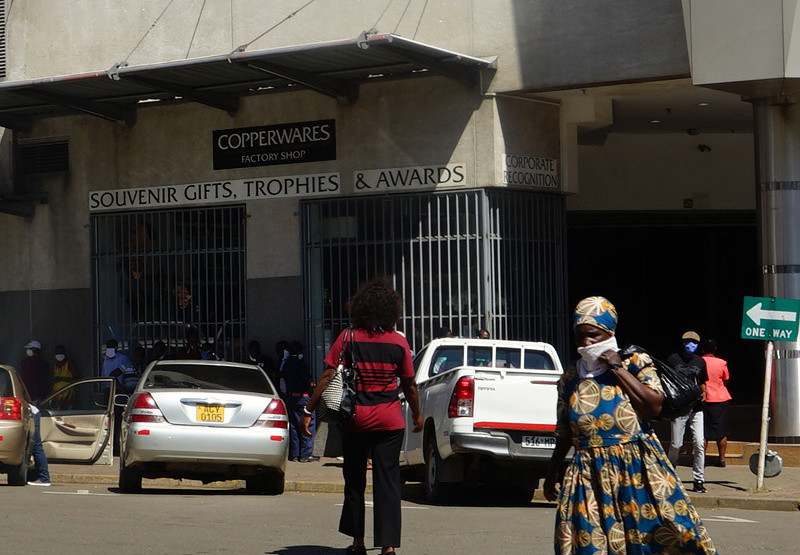 A LOT of formal businesses in Harare reopened Monday after a five-week national lockdown imposed by the government to try and stop the spread of COVID-19.

However, he announced the lockdown had been reduced from level three to two, allowing industry and commerce to resume operations.

A survey carried out by NewZimbabwe.com Monday morning showed that a high number of workers had made their way to the Central Business District (CBD).

However, most people who use ZUPCO buses to get to work complained of waiting for hours to get transport.

Police and army personnel were manning check points on most major roads leading into the CBD.

A high number of people had face masks on, following a government directive. Wearing face masks in public places is now a requirement in terms of new public health regulations gazetted Saturday and anyone who fails to wear one when leaving home can be arrested and sentenced to one year in prison.

A lot of banks, pharmacies, supermarkets and hardware shops were reopened for business. Queues at fuel stations and banks were also observed.

However, there were no vendors and money changers in the streets as police and municipal workers continued to patrol the streets and kept a watchful eye on informal traders.

Retailers at Joina City at the corner of Jason Moyo and Julius Nyerere streets were sprucing up their shops while locked inside with hopes to resume operations this week. Employees of Bata shops dotted across the CBD were also observed cleaning the closed shops adjusting prices for reopening.

However, the popular Gulf complex in downtown CBD and surrounding shops in the area remained closed.

There were winding queues at Copacabana, Market Square and Fourth Street bus terminals as people waited for the few ZUPCO buses available while social distancing was not being observed.

Most people interviewed by NewZimbabwe.com welcomed the easing of the lockdown restrictions saying they were starving at home due to closure of businesses.

“People are starving and the introduction of level two is welcome because we are now able to fend for our families. The government should ensure that the majority of people who were under lockdown without food, get assistance,” said Tongesai Madamombe of Southlea Park Harare.