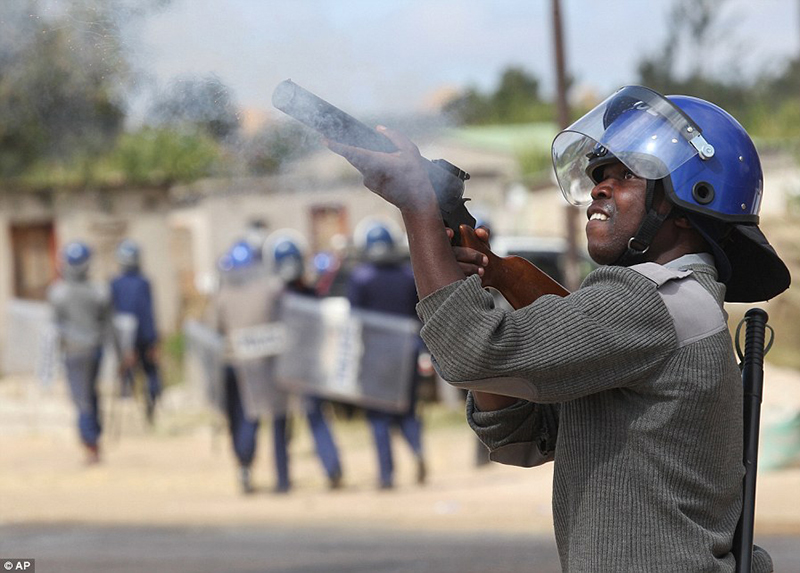 HARARE CBD was Monday afternoon reduced into a war zone as police fought running battles with vendors, among them, those selling MDC regalia outside the main opposition’s headquarters.

This comes after authorities have persisted with their attempt to rid the country’s busiest CBD of traders who ply their trade illegally along city pavements.

Police fired teargas around the ZimPost Mall and some surrounding areas including outside the MDC Headquarters, igniting scenes that saw defiant vendors throw broken concrete blocks in retaliation.

Business operators around the area were forced to close their shops fearing destruction or looting of their property.

The usually busy supermarket chain, OK along First Street, together with prominent shops such as Bata, TV Sales and Hire along Nelson Mandela Avenue were also forced to shut down for long periods as operators took a cautious approach to events unfolding.

Relations between police and ordinary citizens took a turn for the worse August 1, 2018 when six people were gunned down by what is suspected to be soldiers and police officers who were deployed in central Harare to quell wild protests by opposition supporters who were not happy about the slow announcement of the July 30 election results.

While the army has denied causing any fatalities and taken a back seat, police have remained conspicuous as they are taking part in operations to rid the city centre of illegal vendors.

On Christmas Day, a man died during ugly skirmishes between police and some villagers in Chiredzi.

Hard pressed Zimbabweans are angry with the Zanu PF led administration for failure to manage the economy and condemning a large majority to abject poverty.