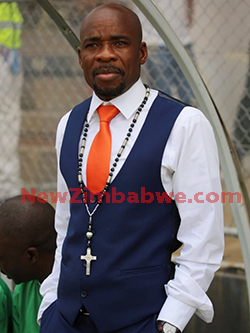 HARARE City fired a three-goal salvo in eight minutes to beat How Mine 3-1 as they clinched their second Chibuku Super Cup in three years in front of a decent crowd at Rufaro Stadium Saturday.
How Mine were the dominant side until the floodgates opened after 65 minutes of play when Farai Madanhanga got to the end of an inch perfect Martin Vengesai cross to put the Harare side in the driving seat.
But as Kelvin Kaindu’s men tried to make amends, they were soon to succumb to a quick William Manondo brace scored in the 73rd and 74th minutes allowing City to put the game beyond their battling opponents.
How Mine scored a face saver in the 84th when Peter Moyo rifled a beauty from close range.

A disappointed Kaindu said during post-match interviews that it was painful to lose a match in which his charges showed greater determination to win.
“Very, very difficult to lose a game where we dominated; we created so many chances, the opponents only capitalised from the few mistakes that we created,” said the Zambian gaffer as he also blamed their misfortune on problems in their camp.
“If you are going to a cup final and the player is looking for transport only to board a kombi to where you are going to meet, it will always hurt you when you lose concentration and especially when the opponents score…”
He added: “We give credit to the players. We have worked very, very hard under very difficult circumstances; we needed money than anything else, it’s unfortunate we have lost.”
Philani Ncube, coach for the newly-crowned Chibuku champions, admitted that his boys struggled in the first half but was amazed with how they turned on the power after the break.
“I need to congratulate the boys. They played positive. In the first half, we struggled but then I was amazed with the way they turned around play in the second half.
“Definitely in a cup competition, it’s not about performance, it’s about results,” he said.
Harare City are the most successful side in the country’s richest cup competition, having been to three of the last four Chibuku Super Cup finals and winning twice in 2015 and 2017.
They walk away $75,000 richer plus a ticket to represent the country in the CAF Confederations Cup next year.Advertisement