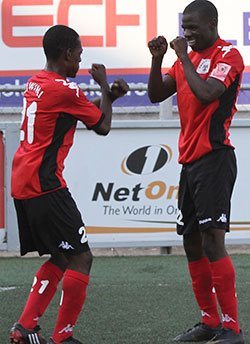 HARARE City have been dealt a huge blow as they will be without star player Silas Songani and defender Dickson Chrispen when they face CAPS United in their decisive Castle Lager Premiership tie at the National Sports Stadium on Sunday.
The match between the two sides is the championship decider. The two players are suspended for accumulating three yellow cards while Caps United will also be without Leonard Fiyado who is also suspended for the same reason.
Still, Mawiwi remains confident.
“It’s sad we will be missing them. They are our key players but we have to do with the players available,” he said.
“Whoever is going to be chosen knows what we need to do. We are not under pressure. We remain level headed like we have been since week one.”
The championship race this term has been one of the most fascinating in the history of the premiership with the leadership of the league table changing hands between three teams- defending champions Dynamos, Highlanders and Harare City on several occasions.
And with just one match left in the campaign it is set for an intriguing conclusion.
Harare City, who were third in the race going into last weekend’s games, took a two-point lead at the summit of the log on Sunday following their comprehensive 4-0 victory over fellow title challengers Highlanders to take their points tally to 53.
They replaced Highlanders at the top with defending champions DeMbare retaining second spot after being held to a 2-2 draw at Chicken Inn. They remained on 51 points with just one match left before the end of the campaign while Highlanders slipped to third, also on 51 points.
Now Bigboy Mawiwi’s men need a victory of any margin in their last game against Makepekepe to land their maiden championship since they joined the elite three years ago.
This is because both Dynamos and Highlanders will not be able to catch up with them even if they also win their respective matches.
DeMbare, who host relegation threatened Black Mambas, will be praying that Caps United will do them a favour by beating Harare City to stop them from going to the winners’ podium.
It will not be surprising to see Dynamos fans forming an unholy alliance with their eternal rivals Caps United for the downfall of Harare City on Sunday.Advertisement

Elsewhere, Highlanders will be at home against Luke Masomere’s Shabanie Mine in their last match of the season hoping for a slip up by both Dynamos and Harare City.
FC Platinum on fourth position with 49 points host army side Buffaloes at Mandava Stadium in their last match of the campaign.
Caps United trail FC Platinum by one point and are aware a win over Harare City and a stumble by Lloyd Mutasa’s FC Platinum will see them finishing in the top four.