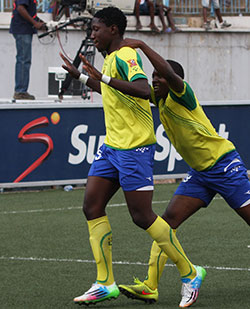 HARARE City will honour their players on Friday night for helping the team survive relegation on the final day of the league programme.
The Sunshine City Boys had a false start to the campaign but a late rally saw them surviving the dreaded chop in their last match of the campaign when they defeated Chicken Inn 1-0.
Masimba Dinyero’s men eventually finished on 11th position with 38 points and the club hierarchy has decided to honour their outstanding stars.
Club secretary Mathew Marara said players would win awards in categories like Player of the Year, Players Player of the Year, Top Goal Scorer, Most Disciplined,Most Improved, Most Consistent, Most Loyal and Rookie of the Year.
Those vying for the Player of the Year Award are Martin Vengesai, goalkeeper Maxwell Nyamupangedengu, David Kutyauripo while Francesco Zekumbawira, Osborne Mukuradare and Martin Vengesai have been lined up for the Top Goal Scorer Award.
However, Mukuradare is certain to land this one as he has the highest number of goals –eight compared to six scored by the other contestants.
For the Most Improved Player there is Timire Mamvura, Talent Chawapiwa and Raymond Uchena with the Most Consisent Player category featuring Nyamupangedengu, James Jam and Martin Vengesayi.
In the Most Loyal category there is Tendai Ngulube, Raymond Uchena and Munyaradzi Nyenye. Rookie Player of the Year category features Tinotenda Kadewere and Takudzwa Chimwemwe with Nyamupangedengu, David Kutyauripo and Martin Vengesai vying for the Players’ Player of the Year.
Harare City have made changes to their technical team ahead of the forthcoming season with former Caps United coach Taurai Mangwiro now the man in charge.
Dinyero, who was in charge on an interim basis in the just ended campaign, has been redeployed to the juniors where he will be responsible for scouting talented players which will be supplied to the senior teamAdvertisement