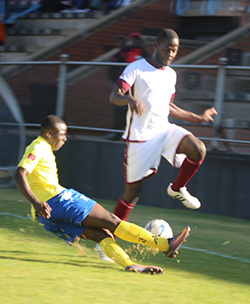 HARARE City continued with their resurgent form when they beat visiting Shabanie Mine 2-0 in a midweek Castle Lager Premier Soccer League encounter played at the reopened Rufaro Stadium on Wednesday afternoon.
Goals by William Manondo and Malvin Gaki in either half saw the Philani “Beefy” Ncube-coached side post a priceless victory over the Zvishavane outfit.
The visitors had a better first half but were their own worst enemies when they failed to convert chances that came their way.
A disappointing Takesure Chigwari, coach for Shabanie Mine, admitted that they could have done better with a match they dominated in the first half.
“I think we need to do better, the game was good in the opening minutes but two mistakes saw us getting punished,” Chigwari said.
“We need to work hard and get some points because we are dropping down the log and we need to do something.

Rethinking their options … The Shabanie Mine bench