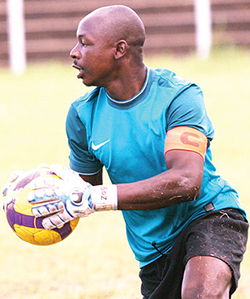 THERE is no stopping Harare City’s spending spree.
After snapping Tendai Samanja from Caps United and Themba Ndhlovu from Dynamos, the municipality-owned side on Tuesday swooped on veteran goalkeeper Tafadzwa Dube from the Green Machine.
City secretary Mathew Marara confirmed the move on Tuesday.
“He signed a one year deal and has an option for another year,” said Marara.
“We don’t want short term contracts as we have to negotiate at the end of the year.”
Caps United also confirmed the departure of Dube.
City, who survived relegation on the last day of the Castle Premiership last season, has not only got players from financially troubled Caps, but they started the move getting coach Taurai Mangwiro and his assistant Mike Madzivanyika.
Then former champions have also lost Kelvin Bulaji to Dynamos, who signed a two year deal with the league champions.
In Bulawayo, How Mine are looking at a number of players from Highlanders whose contracts expire on December 31 and are now at the mercy of new coach Bongani Mafu.
Mafu was appointed last week.
Charles Sibanda, Hillary Madzivanyika, Mthulisi Maphosa and Joel Ngodzo are said to be eying moves to the goldminers, who will be releasing Emmanuel Mandiranga to FC Platinum, Gilbert Banda and George Magariro.Advertisement