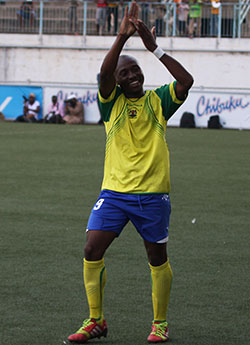 AFTER being beaten home and away in the league campaign last season and a further defeat in the Chibuku Super Cup, Harare City will be looking for revenge against FC Platinum when they face off in a rescheduled Castle Lager league tie at Rufaro on Wednesday.
Elsewhere, at Ascot Stadium, in Gweru, Chapungu host ZPC Kariba in another midweek fixture.
Harare City, now under Taurai Mangwiro, have found it difficult against the Zvishavane outfit since 2012.
In their head to head encounters since 2012, FC Platinum won three, drew one while the Harare City won only two. They were also beaten to the Chibuku Super Cup 3-1 on penalties.
Those memories are still fresh in their minds and team manager Pardon Chivasa expressed confidence this could be their chance.
“FC Platinum are a very good and organised team,” said Chivasa.
“They have given us problems whenever we meet them and we need an improved performance against them this time around.
“It could be our chance this time around. So many things have changed and this could be our time. We have been preparing very well for the encounter.”
But FC Platinum coach Norman Mapeza who masterminded the defeat in the Chibuku Super Cup final said they were not looking into the past.
“We are not looking into history,” he said.
“A lot of things have changed now. Harare City have one of the best coaches in Zimbabwe at the moment and are playing well.
“We need to approach the game with caution. We have had mixed results and are hoping to pick maximum points.”
Mapeza said he was not complaining about his side’s congested fixture programme.