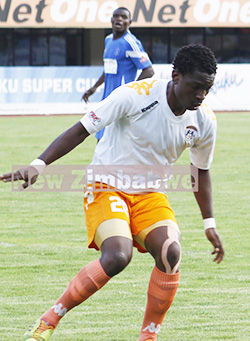 Dynamos 1-2 Harare City
FINALLY, the glory that Harare City have been waiting for has arrived.
On Saturday at the National Sports Stadium, City stunned favourites Dynamos to lift the 2015 Chibuku Super Cup after a pulsating final.
And with that came the ticket to represent Zimbabwe in the 2016 Caf Confederation Cup, thanks, once again, to that ultimate party spoiler, City coach Taurai Mangwiro.
He has handed the league title to Dynamos on two seasons in a row, but on Saturday chose the perfect stage to show what he is made of as Francesco Zekumbawire and Kuda Kumwala struck in the 17th and 83th minute to seal a famous victory.
Richard Kawondera scored Dynamos’ face-saver in the 92nd minute.
Perhaps, this erases the pain of the 2014 final against eventual winners FC Platinum, who scored in injury time in that final at Mandava Stadium in Zvishavane to level the scores at 1-1 and then forced a penalty win.
Then City cried foul that Walter Musona’s goal had not crossed the line and that City, then under Masimba Dinyero, deserved a free kick before that fateful corner kick that led to the goal.
But this time around, there was no such mourning and Mangwiro, who is due to for a coaching course in Germany in December, is walking tall.
“I am so excited that we won the Chibuku Super Cup,” Mangwiro said at the end of the match.
“Credit goes to the players and the City management for all this; we could not have achieved anything without their unwavering support.
“We kept out simply game plan to get an early goal and if chances come by a second. That worked for us because we came into the match as underdogs and all eyes being on Dynamos.
“They were the favourites and I am happy my guys were not intimidated at all.”