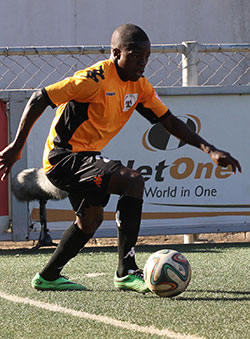 HARARE City will look to continue their revival on Friday when they clash with Chapungu United at Ascot Stadium in Gweru.
After finishing third last season, City were rocked by leadership wrangles at the start of the season and lost seven games in a row before beating Black Rhinos, Triangle and Bantu Rovers and drawing one match.
They have moved from 16th on the log and are now 13th with 10 points and face a Chapungu side that is yet to lose to at home this season.
Among some of their victims, Chapungu count Dynamos (1-0), How Mine (2-1), Caps United (3-0) while Highlanders managed a draw.
Chapungu coach John Nyikadzino is of the opinion that if they can’t win away from home, then no team will win at Ascot.
“We have a very bad record away from home and so we need to make sure that we win all the games at home.
“We have our supporters behind us and I am sure we will get maximum points tomorrow (Friday),” the Chapungu coach said.
City boss Bigboy Mawiwi said theirs was work in progress and would take each game as it comes.
“We are slowly regaining out confidence and the goals are coming. You saw how we played on Monday; I think we are in the right direction. I have always said we will come right very soon,” Mawiwi said.
On Monday, they hammered Bantu Rovers 4-1 with goals from Agripa Murimba, scoring twice, Crybert Muvuti and Phineas Bamusi.
But the effects of playing on a Monday and travelling for an away match three days could also have a telling effect on City.