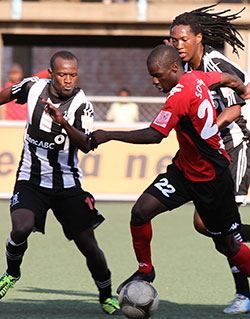 Harare City 4-0 Highlanders
HIGHLANDERS’ chances of claiming a league and cup double went up in smoke Sunday as they were whacked 4-0 by Harare City at Rufaro Stadium.
The writing was on the wall for Bosso on Monday when coach Kelvin Kaindu opted to travel to the UK for his UEFA B licence course, leaving the team in the hands of the untested Bekithemba Ndlovu.
Nathan Ziwini scored twice in the first half while Munyaradzi Diya saved a penalty just after the breather before William Manondo added the third.
Warriors winger Silas Songani then put the icing on the cake for City as they took revenge after being knocked out of the Mbada Diamonds Cup last weekend.
Highlanders beat Harare City 2-0 in the reverse fixture, but they came unstuck against a well drilled City side that was oozing with confidence from the start.
The loss saw Bosso drop to third with 51 points, the same as Dynamos who managed a crucial 2-2 draw against Chicken Inn at Barbourfields on the same day.
City are on top of the league table with 53 points and face a troubled Caps United next Sunday.
The Caps camp is already in tatters as coach Taurayi Mangwiro, a former Dynamos player, is reported to have quit after the 2-0 win over Motor Action on Saturday. Tendayi Samanja and Hardlife Zvirekwi suffered knocks while goalkeeper Tafadzwa Dube has suffered bereavement.
Away from the capital, Dynamos made a horrible start at BF when Clemence Matawu broke loose on the left, and left Augustine Mbara for dead to set up Tendai Ndoro for goal his 18th goal of the season.
Brian Mbiriri then made it 2-0 in the 16th minute after George Chigova fumbled a cross inside the box.
Tawanda Muparati then brought Dynamos back into the game with a sweet free kick 26th minutes into the game before Cliff Sekete ensured a share of the spoils.
Dynamos claim they were denied a winner from Patrick Khumbula in the dying moments which led to a confrontation between referee Hardly Ndazi and Oscar Machapa.
Machapa was promptly red carded, effectively ending his season and will also miss the first game of the 2014 season, if he will still be at Dynamos.
Dynamos, who played Sunday’s match under protest over the referee, have to beat Black Mambas next weekend, and surely relegate them, while hoping that Caps will do them a favour by holding or beating Harare City.Advertisement