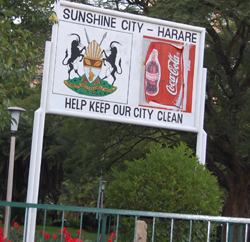 WHENEVER I look at an old picture of Harare hanging on my wall, I marvel at the Jacaranda tree-lined avenues, clean and welcoming. A city of good roads, bright street lights, clean water running down the taps, a venerable health system, and social amenities catering for all age groups.
Harare once was the Sunshine City, a reputation that was not only due to the sunny climate, but how orderly and developed it was. It was a city that many locals and visitors alike dreamt of settling in permanently. It was exuberating with goodness and security. All this has deteriorated into a city one craves to flee from.
A modern city, bustling with life and full of promise was inherited. I am not sure from who, for when I began noticing beauty, we were in Zimbabwe, but they tell me, it used to be Rhodesia. Gogo used to say Salisbury was miles cuter than Harare. Not easy to believe, since I am patriotic. But with years going by, it begins to settle in that even the Harare I came to in the early 80s is miles away from the Harare of the third millennium.
We walk down memory lane into the 80s, possibly the 90s. Sure, Harare was the hub not only of Zimbabwe, not only of Southern Africa, but of Africa. Harare was the face of Zimbabwe, with thousands of tourists flocking through Harare International Airport and several other ports of entry.
Come the 90s, we stopped the sweeping of the streets, garbage collection ceased to be a concern for the city and the residential suburbs. The city council clinics, ambulance service, fire tenders, social centres and social amenities, even Rufaro Marketing, have all now been relegated to the pages of history.
Street lights in the city and the famous “tower lights” in high density suburbs are all but historical facades reminiscent of the good old days. The health system that used to be dependable, with the health centres fully operational in places like Mabvuku, Hatfield, Highfield, Zengeza, even Mbare, have turned into ghost structures. Harare used to run council clinics, remember the good old days of Dr Lovemore Mbengeranwa?

Recreational parks that were places for the family, for relaxation, like Greenwood and Cleverland have been turned into “love nests”. The Harare Gardens itself has been turned into a urinary with some corners made into ‘bedrooms’ by idlers and “budget-hotel-prostitution” points.Advertisement

Harare social services, including ambulances, fire tenders and garbage collection trucks used to provide an efficient service to the residents, but now we have at any given time insufficient city ambulances and fire tenders to serve greater Harare.
Harare roads were magnificently smooth and road markings comprehensible and visible. But today, potholes mark our roads and control speed instead of speed humps. Undogdeable potholes reduce the life expectancy of most vehicles, and also of road users, for many accidents occur because of large ‘fish ponds’ in the middle of the road.
Road edges have been eroded and no-one bothers to repair or to resurface them. Road signs are either missing or are splattered with political figures’ faces! A missing road sign nearly took my life along Seke Road. The ‘island’ in the middle of the road where the road becomes Masotsha Ndlovu Way has no warning sign, and motorists run into it and fly off road or in-road, onto oncoming traffic. People blame it on ‘weekend excitement’. I was not in any high mood, it was the missing sign. No one bothers. The city fathers are non-existent.
The bus terminus for local commuters used to be smart and efficient. Remember the Charge Office terminal for buses to Chitungwiza, Mabvuku years ago? The Market Square terminal for Highfield and Glen Norah? Oh gracious me! Fourth Street terminal used to be clean and had buses taking commuters to and from home in time for work and to meet their families. Of course we cannot blame the City Council, but their roads have destroyed the transport industry that could have been efficient.
Even Mbare bus terminus used to be smart for all rural travellers catching a bus to Mutare, Masvingo, Nyamapanda, Bulawayo, Hwange or Chiredzi. It was so organised you did not need to ask where your bus was leaving from. Now it is total confusion.
We enjoyed the pleasantries of the Sunshine City spilling over into the first few years after independence. Yes, it was still shining close to the turn of the first decade after independence, but as that decade was facing its horizon, one could tell there was disaster ahead. It was neither drought, nor the British, nor the Americans, nor ‘sanctions’.
The trees have aged and fallen, drains haven’t been cleaned for seasons following, bus terminals have been turned into vending posts, with the roofs used as garbage points, streets corners are used as commercial sex outlets. Roads are impassable and dangerous to road users. Have you driven down the many bad roads of torture in Harare’s high density suburbs? Most are historical spots where roads used to be.
Poly-clinics are depleting fast because of neglect, so are play centres. Reversing thirty-three years of neglect and mismanagement might take a great deal of money, but requires vision and a willingness to retain our city to her place of glory.
I wonder then, were we better in the colonial days, with the social and economic stamina that propels a nation, than now, very “independent” but with no amenities to function as a nation, as a city, and indeed as families? Harare, Sunshine City Emeritus, is but a reflection of our country reduced to ‘emeritus’ status by the present social and political quandary we find ourselves in.
Rest in Peace Harare. Till we meet again.