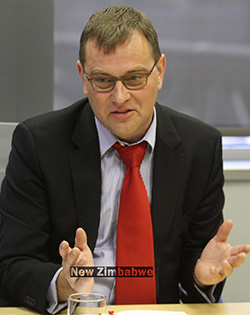 ZIMBABWE continues to make token payments of $150,000 on its debt with the International Monetary Fund (IMF), the institution’s Harare representative said Wednesday.
The country is choking under a foreign debt of about $9 billion, including some $111 million owed to the IMF.
The Fund’s resident representative, Christian Beddies, said the government was making payments of $150,000 of IMF per month.
Similar payments were also being made to the World Bank and the African Development Bank, he added.
“The external position remains very precarious with a large current account deficit and that is why it is important to increase payment capacity and improve the situation and this is part of what we want to achieve together with government in this SMP,” Beddies told journalists at a press briefing.
Of the $500 million allocated to Zimbabwe in IMF special drawing rights in 2009, the country is keeping $152 million as reserves although it could access the funds, he said.
A committee on to come up with options to clear the external arrears chaired by the central bank governor and comprising seniors officials from  the finance ministry, IMF, World Bank and AfDB remains a work in progress, Beddies added.
He was speaking ahead of an IMF visit next week from August 31 to September 11 to conduct the second review under the 15-month staff monitoring programme (SMP)
The SMP is an informal agreement between a government and IMF staff to monitor the implementation of its economic reforms.
The programme, which runs from October 2014 to December 2015, does not entail resumption of funding but could lead to a debt rescheduling by the Paris Club, an informal group of official creditors whose role is to find coordinated and sustainable solutions to the payment difficulties experienced by debtor countries.
Beddies said Harare was remains on track to meet its targets under the SMP but warned that economic prospects for the country remained difficult.
“Zimbabwe met all the targets set for the first review,” he said.
“These were done under difficult economic conditions and preliminary conditions are that the SMP remains on track, but of course the mission will have to make that assessment and discuss with the authorities, policies going forward.”Advertisement