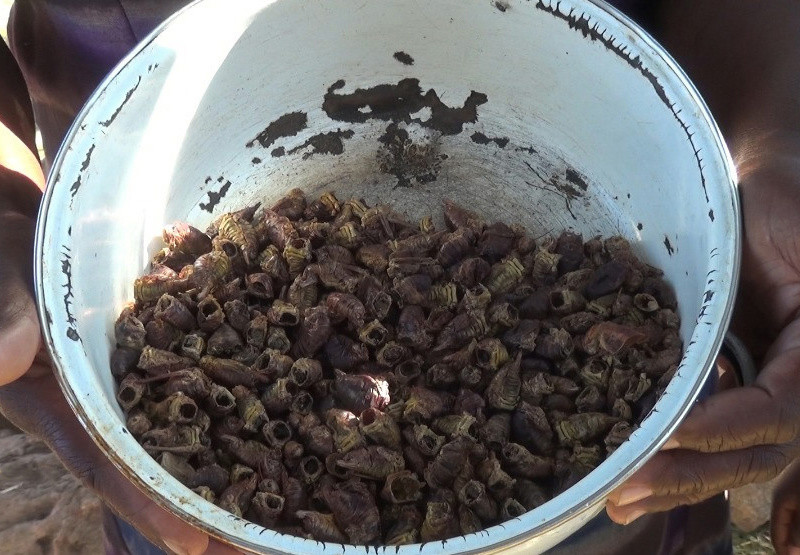 A bowel of Mamunya worms
Spread This News

HUNDREDS of people living in an informal settlement in Harare West have turned to harvesting and eating edible worms as the five-week national lockdown has made it impossible for them to find other means of survival and purchase basic commodities.

Despite living in squalor and deplorable conditions, the situation at Chireche on the outskirts of Harare West has been worsened by the current lockdown, which enters its fifth week this Monday and is expected to end next week Sunday.

“We have run out of food. We have nothing to eat,” Siphiwe Mabvira, one of the residents at the farm compound told NewZimbabwe.com during a recent visit.

“I am no longer living in harmony with my husband because we don’t have any food to give to our children. This morning, we had a misunderstanding and he left home infuriated. Perhaps when he comes back he will bring a few fresh maize cobs that he usually steals from other people’s fields.”

As the desperation for food rages on, some of the inhabitants at the farm, which is in Ward 41, have resorted to eating worms, known as mamunya in Shona.

However, the worms are creating health problems especially on young children who are constantly complaining of stomach aches and some who have developed body rash.

“It is because of hunger that we are eating ‘Mamunya’ as we have nothing to eat. My child developed a rash all over the body after eating these insects. It may get worse, but I can’t go to a hospital because I don’t have money,” another resident who only identified herself as Mai Masuku said.

At the farm compound, the inhabitants who are all unemployed and rely on menial jobs for survival, do not have access to running water and are forced to use the nearby bush to relieve themselves, posing another health challenge in the age of the deadly COVID-19 pandemic.

“We relieve ourselves at the nearby railway line. We can’t use our toilets because we don’t have water,” said one man who identified himself as David.

Contacted for comment, Harare West MP Joanna Mamombe took a swipe at Finance Minister Mthuli Ncube accusing him of failing to come up with a clear programme of identifying and assisting vulnerable people who are in dire need of food aid as the national lockdown takes its toll.

“It’s unfortunate that at this critical time when we are having a crisis not only as Zimbabwe but the entire world that a Minister of Finance can talk of some complicated logarithms. If you are going to use mobile phone numbers to identify the vulnerable, what about those without mobile phones? It is really unfair,”  Mamombe said.

The government has announced it will be assisting one million vulnerable families with $180 a month using a database lifted from mobile phone service providers’ users.

Local Ward 41 Councillor Kudzai Kadzombe bemoaned the lack of COVID-19 awareness programmes in Harare West. She also implored the Health Ministry to widen its coronavirus campaign so that no one was left behind.

“There is a huge gap in terms of information here. The residents know basic information but in terms of what the symptoms are and what they should do once any member of the community is affected with COVID-19, they don’t know what to do,” she said.