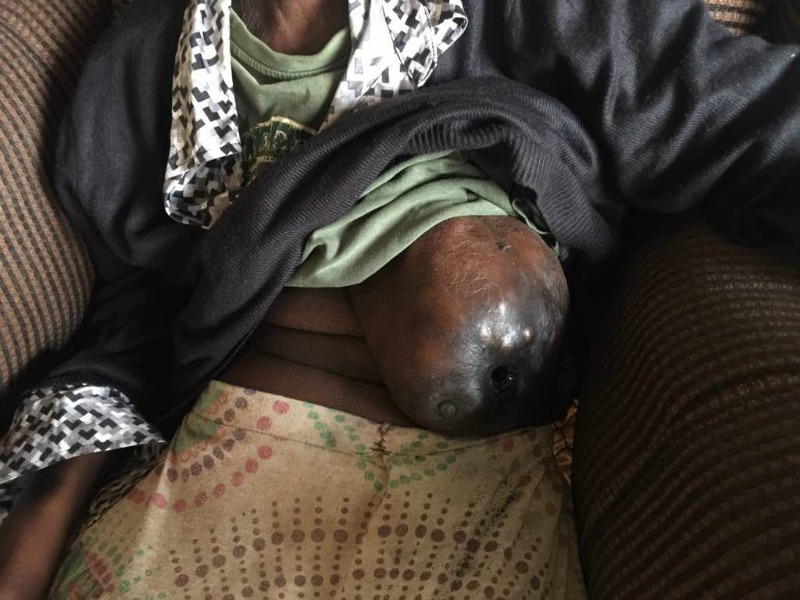 A Harare woman is appealing for financial assistance from well wishers to undergo surgical operation for a breast cancer ailment that has made her life a waking nightmare.

“All I want now is financial assistance for the doctors at Parirenyatwa Hospital to remove my left breast because I can’t stand the pain anymore,” said Mabel Chigariro during a visit by journalists to her Glen Norah home Wednesday.

What started two years ago as a boil on her breast later turned out to be the dreaded breast cancer following her visit to Parirenyatwa Group of Hospitals.

But what she found as prohibitive medical costs which were being demanded for her treatment made her decide to live with the disease at home.

Chigariro did not even have a pain killer to fight off excruciating pain she suffered.

“Now I can’t even go to the hospital because I do not have bus fare; I am being looked after by my mother, Ambuya Julia Chigario (71) and my sister-in-law,” she said, waving some nagging flies away from her breast.

“The last time I visited the hospital I was told to buy two pints of blood and I could not afford them.

“Now the doctors say they must operate on me and remove the breast but worse still I can’t afford the medical bills.

“So, I am appealing to well-wishers who can assist me by paying for the operation so that I can be a free woman; I am living a painful life.”

Mabel, who is originally from Mhondoro, said she had to relocate to Harare where her mother stayed, with hopes of getting some medical help.

“Even if I were to turn to other solutions outside medical care, I can’t still afford.

“Someone from Hurungwe phoned me and said I must come to get some traditional medicines but I couldn’t go there because I do not even have any bus fare.

A further discussion with Mabel showed that there was a serious information gap on cancer, type of food she must eat and on how to handle her current situation.

Her mother, Ambuya Chigariro, said she also had to sell some of her livestock so that her daughter could get some help but all has been in vain.

“I could not just sit and watch my daughter in agony. I had to sell my cattle and goats but it seems we are losing the battle,” she said dispairingly, also appealing for government assistance to get her daughter healed.

Information from the National Cancer Registry says that cancer has overtaken HIV as the number killer in the country with an average of 5000 new cases being diagnosed every year.