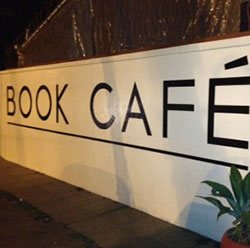 THE Book Cafe, a reputable free expression platform, has shut down to due financial challenges.
This is the second time that the venue, which has given a platform to many artists to horn their craft, has shut down.
In 2012, the venue, while still located at the Five Avenue shop in centre, closed shop but months later reopened along Samora Machel Avenue, in the capital.
The venue also suffered a major setback after its founder Paul Brickhill died in October last year. His son, Tomas, took over the reins.
In a press statement the venue management confirmed the closure.
“As of the first of June 2015, the Book Café closed its doors at 139 Samora Machel Avenue.  The iconic venue first opened at its original Fife Ave shopping centre venue back in 1997 and has since treated audiences to nearly two decades of memorable live music, performance poetry, stand-up comedy, film screenings, discussions and more.
“The Book Café has had a significant positive impact on the Arts and on cultural entertainment in Zimbabwe’s capital, including bringing traditional mbira music into the mainstream, championing freedom of expression in the Arts, providing a platform for Zimbabwe’s first stand-up comedians and hosting a regular weekly Open Mic,”read part of the statement.
In January, the Book Cafe launched a series of fundraising campaigns including an online crowd-funding initiative to raise funds to keep the venue open.
“The closure comes after several months of valiant struggle to find support to continue running, including a crowd-funding initiative through Indiegogo which witnessed love and support from people in Zimbabwe and around the world, but was not sufficient to put the Book Café on steady ground.
“The venue has faced many struggles through the years, and somehow has always managed to pull through, due in no small part to the support of its patrons and in particular to the large community of artists and performers who have passed through over the years, who shaped the very nature of what the ‘Book Cafe’ concept means, and affectionately refer to the venue as ‘the home of the artists’,” said the organisation.
Tomas Lutuli Brickhill who took over at the helm after the death of Book Café founder Paul Roger Brickhill said, “I’ve decided to take a step back in order to re-strategise and restructure the business.Advertisement

It was a difficult decision to close the Samora Machel venue, but if Book Café is to have any place in the future of Zimbabwe’s Arts & Culture scene, I believe that our current course of action is unavoidable.
“At this stage it is too soon to speculate where or when we may reopen, but I am confident that in ‘Book Café’ we have one of the strongest and most respected brands in the country.
I have no intention of letting this be the end of the story for Book Café; but in order for us to start writing the next chapter, we have to close the last one. Aluta Continua.”