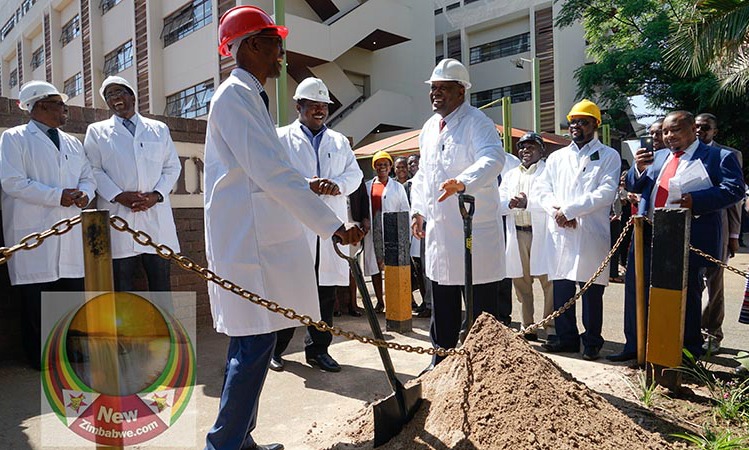 Officials at the groundbreaking event
Spread This News

HARARE’S upmarket hospital, Avenues Clinic has set aside $10 million to give the private health institution a facelift as it continues to attract the country’s political elite and foreigners.

This came out during a ground-breaking ceremony at the institution on Monday.

Situated in Harare’s Avenues area on the northern peripheries of central Harare, the clinic has been a favourite with the country’s political elite who continue to shun less equipped public hospitals.

Last month, Foreign Affairs Minister Sibusiso Moyo was rushed to the hospital to receive some treatment over a kidney ailment while Vice President Constantino Chiwenga reportedly also received some treatment there last week.

Then Prime Minister Morgan Tsvangirai 2009 was admitted at the institution for injuries sustained in a horrific car crash that killed his first wife.

The hospital has since effected a 14 percent hike in charges in the wake of prevailing drug shortages with signs producers were withholding the pharmaceutical products citing viability concerns triggered by the plunge in the local currency against the US dollar value.

Speaking while presiding over the ground-breaking event, Avenues board chair Pearson Chitando defended the hike saying there was a “price to pay for anything”.

“Yes, there is a price to pay for anything and that price, we will recover over numerous years,” he said.

“Foreign currency is not easy to come by and you may know that we attract foreigners from the region to our hospital and we are hoping to benefit from the tourism inflows into Victoria Falls where acute cases will be transferred to this facility.

“We have not had a tariff increase since May 2014, but we have to look after our staff who have enjoyed salaries but, without any tariff, we cannot give as much as to what they request.”

He denied the hospital was profiteering and only concerned about foreigners.

Avenues Clinic was founded 35 years ago with locals in mind but has attracted mostly the elite.

The refurbishment, which commenced on Monday, is planned for the whole complex.