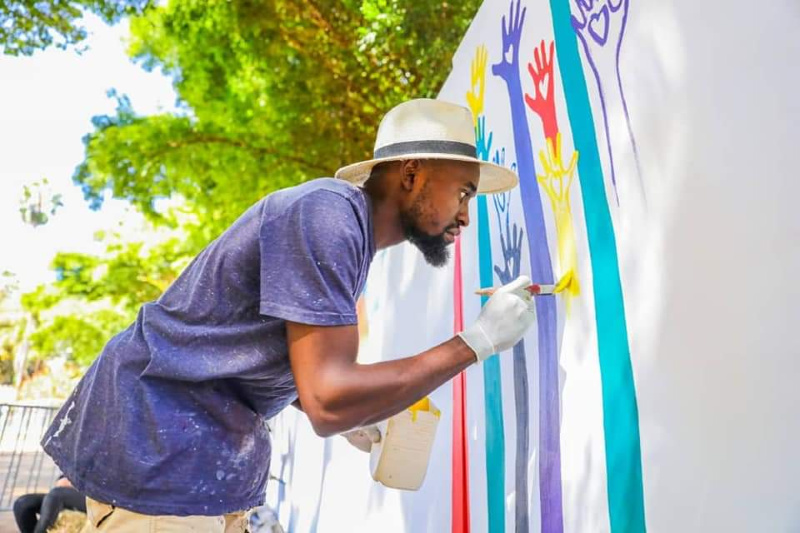 TWO Harare based visual artists have said they hope to collaborate with City Fathers in the capital to help it achieve its 2025 global city vision for the capital.

Marcus Zvinavashe and Nyasha Jeche of CaliGraph told NewZimbabwe.com in an interview that their plan was to brighten the country’s capital city through murals.

The painting in Budiriro 2 is a celebration of the national team’s achievement, qualifying for the 2019 Africa Cup of Nations (AFCON) to be held in Egypt this June.

“We hope the council will understand that their 2025 vision of making Harare a global city requires art too. If we were to look at all the global cities you will see that their architecture is intricate with art.

“Like if they say let’s have a mural on one side of the council building. If it starts with the council it will then be easier for us as visual artists to go work on other spaces,” Zvinavashe said.

The Harare City Council has indicated it has a vision of achieving a world class city status in the next five years.

Jeche making reference to the famous Mbare Matapi flats paintings added that murals with motivational messages on key buildings around the country would brighten up citizens’ mood in these difficult times.

“The mural in Mbare is the most popular in Zimbabwe, it brings happiness to people. Now imagine the whole country not just Harare but also other areas like Mutare with similar art that has bright colours and inspirational messages,” Jeche said.

The former Chinhoyi University of Technology (CUT) students have in celebration of life, women and art spattered murals around the capital.

They have worked on murals on the late music icon, Oliver Mtukudzi in Highfield, super heroines (author Yvonne Vera, activist Mai Musodzi and lawyer Nyaradzayi Gumbonzvanda) at the British Embassy and Theatre Walk of Fame in the Harare Gardens.