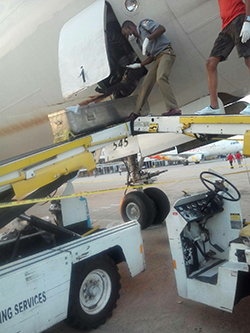 FILM star Harrison Ford was injured on Thursday when the “Star Wars” actor crashed his vintage plane on a Los Angeles golf course shortly after taking off from a nearby airport, his publicist said.
The single-engine plane clipped a tree as it attempted to return to Santa Monica Airport shortly after take-off, and the pilot was “alert and talking” as he was taken to a local hospital, Assistant Los Angeles Fire Chief Patrick Butler said.
Butler declined to confirm that Ford was on board the silver and yellow aircraft, but Ina Treciokas, publicist for the 72-year-old actor, issued a statement confirming the details:
“Harrison was flying a WW2 vintage plane today, which had engine trouble upon take off. He had no other choice but to make an emergency landing, which he did safely.
“He was banged up and is in the hospital receiving medical care. The injuries sustained are not life-threatening, and he is expected to make a full recovery.”
Ford’s son, Ben, said on Twitter that he was at the hospital. “Dad is OK. Battered but ok! He is every bit the man you would think he is. He is an incredibly strong man.”
A National Transportation Safety Board spokesman said the pilot of the plane reported losing engine power immediately before the crash at 2:20 p.m. PST (2230 GMT) but that the agency would conduct a full investigation to determine the cause of the accident.
Butler said the pilot was initially tended to by bystanders before paramedics responded and transported him to a local hospital, where he was listed in fair to moderate condition.
Paramedics “initiated spinal immobilization, started an IV and began all the necessary medical protocols that we do,” Butler said.
Celebrity website TMZ reported that Ford suffered multiple gashes to his head and was bleeding profusely.
Ford, best known as archaeological adventurer Indiana Jones in “Raiders of the Lost Ark” and its sequels and as space hero Han Solo in the “Star Wars” series, is a longtime pilot.
Carlos Lugo, 63, said he was playing golf at the Penmar Golf Course when he saw a plane that had just taken off from Santa Monica Airport lose power and turn around.
“When he flew over us we knew it was too late to make it back to the airport,” Lugo said.
The Ryan Aeronautical plane involved in the crash was built in 1942 and registered to the company MG Aviation Inc, according to FAA online records.Advertisement

In 1999, Ford and a flight instructor went down in a helicopter crash north of Los Angeles, and the helicopter also was registered to MG Aviation, according to a Los Angeles Times report at the time.
Ford suffered a broken leg last year while filming on the set of Disney’s “Star Wars: Episode VII” set in England, in which he is reprising his role as Han Solo. Production on the movie was halted for two weeks as he recovered.