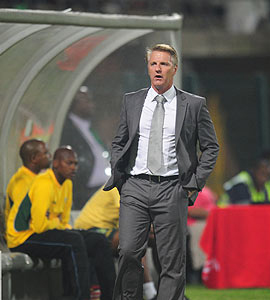 UNCERTAINTY continues shrouding the availability of Caps United coach Mark Harrison who is yet to begin pre-season with the team, a month after he was appointed.
The Harare giants began training for the new season three weeks ago but Harrison is still holed up in South Africa.
According to Caps, Harrison is waiting to obtain his work permit while also closing home in South Africa and the club’s has been shifting dates of his arrival to begin work.
But the immigration department denies any knowledge of the Briton application of a work permit whose processing normally takes three weeks in Zimbabwe.
Assistant regional immigration officer Francis Mabika said they do not have records of Harrison’s application.
“As far as we are concerned, we do not have Mark Harrison with a work permit in our records,” said Mabika.
“The process of obtaining one usually takes just three weeks meaning if Caps claim their coach applied as soon as he was appointed, he would have been issued with one by now.
“I am sure Caps can explain better on this.”
The club’s chief executive officer Joe Makuvire was not available for comment.
Harrison’s assistant coach Brenna Msiska is currently in charge of the team.
Msiska said if the Englishman does not turn up on time, he will go on to finalise the squad for the new season.
“We expect the head coach to be here anytime. Things are going on well so far and we are just waiting for him to finalise our squad.
Due to time constraints we might come up with the final squad soon so that when the head coach comes he will just fine tune those we would have selected,” Msiska said.
Caps are working on securing friendly match opponents for this weekend.Advertisement