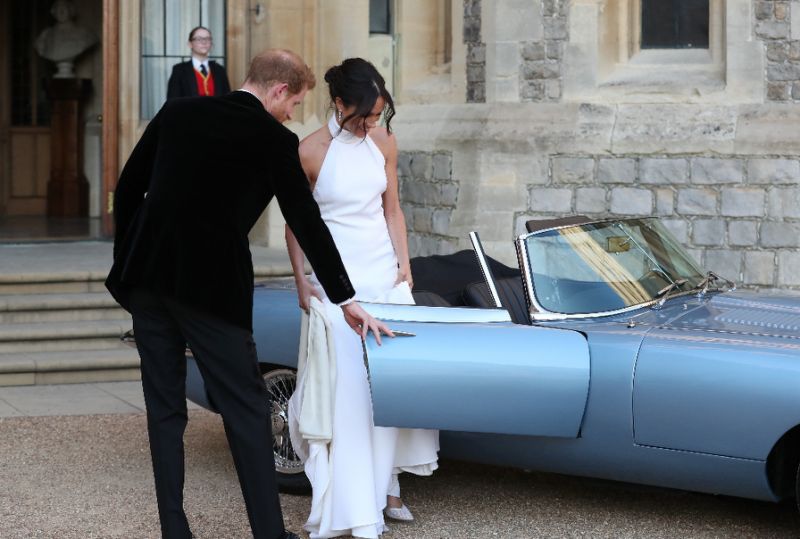 PRINCE Harry and Meghan Markle tied the knot at Windsor Castle on Saturday in a royal wedding like no other, mixing British pomp and African-American culture in front of a celebrity congregation and cheering crowds.

The new Duke and Duchess of Sussex exchanged vows in St. George’s Chapel in a historic ceremony, sealed with a kiss, which brought the biracial US TV star into the heart of the British monarchy.

The couple held hands throughout and exchanged vows in a Church of England service modified to reflect the bride’s heritage and strong sense of independence.

Firebrand US pastor Michael Curry delivered a full-throttle address invoking slaves and the power of love, and a gospel choir sang classics “Stand By Me” and “This Little Light of Mine”.

Markle began her walk down the aisle alone with her 10 bridesmaids and page boys walking behind her flowing white silk dress, designed by Clare Waight Keller at the French fashion house Givenchy.

Her father had been due to meet her half-way but after he pulled out due to heart surgery, Harry’s father Prince Charles stepped in to escort her to the altar.

With the words “I will”, 33-year-old Harry, and US former actress Meghan, 36, declared they would love, comfort, honour and protect each other.

Archbishop of Canterbury Justin Welby declared them husband and wife — sparking huge cheers from crowds watching on big screens outside.

The newlyweds later toured Windsor in an open-topped carriage, waving and smiling to the thousands of flag-waving well-wishers lining the streets.

The bride’s father Thomas Markle followed the wedding on television and voiced regret he was unable to attend, TMZ reported.

“My baby looks beautiful and she looks very happy. I wish I were there,” he told the US celebrity news website.

For the evening reception at nearby Frogmore House, attended by 200 close friends and family, Meghan changed into a sleek lily white halterneck silk crepe gown by Stella McCartney.

On her finger she wore an emerald-cut aquamarine ring formerly owned by Harry’s mother Diana, a gift from her new husband.

Harry drove his bride to the party himself in an open-top E-Type Jaguar with the number plate E190518 — the wedding date.

In another of the numerous personal touches, the prince hand picked flowers for Markle’s bouquet from their home at Kensington Palace.

Her five-metre veil also contained floral designs from her native California and all 53 Commonwealth countries.

“You look amazing,” Harry told his bride as she arrived.

He and his brother Prince William — his best man — wore the blue doeskin frockcoat uniform of a major in the Blues and Royals, the regiment Harry served with in Afghanistan during his 10 years in the British army.

The couple grinned during Curry’s dramatic address about the power of love, in which he quoted civil rights icon Martin Luther King.

“I’m talking about some power. Real power. Power to change the world,” the African-American preacher intoned.

There were no political leaders among the 600 guests but many celebrities, including Idris Elba, James Blunt, Tom Hardy and James Corden.

Some of Markle’s former co-stars in US hit television series “Suits” attended, as did Harry’s ex-girlfriends Chelsy Davy and Cressida Bonas.

The newlyweds kissed on the chapel’s West Steps after the wedding before starting their procession, to the delight of the crowds.

“It’s been a historic, epic day,” said Leslie Owusu, from nearby High Wycombe.

“It’s a union of different cultures, you’ve got America and England and a fusion of two people that love people and life.”

Hundreds of street parties and public screenings were held around Britain where the wedding is a welcome respite for a country still burdened by austerity and divided over Brexit.

Revellers also packed into bars to watch as far afield as Sydney, Hong Kong and Markle’s native Los Angeles, for what is likely to be the last big British royal wedding for a generation.

In Windsor, thousands of fans bagged their spots by dawn, bearing rugs and picnics, Union Jack flags and patriotic paraphernalia, and the bubbly was flowing freely.

“It made me really emotional when I saw them coming past,” said Helen Oliver, 50.

The queen hosted a lunchtime reception at the castle, where Elton John performed, Charles and Harry made speeches and the guests ate pieces of lemon and elderflower cake.

In another break with convention, Meghan was due to speak at the evening bash.

“She’s got her own voice, a personality, and I think all that made a huge impression on everybody,” said Shrabani Basu, a Commonwealth historian.

The couple met on a blind date in July 2016 and had a whirlwind romance, criss-crossing the Atlantic as she continued filming “Suits” in Toronto.

Harry was scarred by his mother Diana’s death in a Paris car crash in 1997 when he was just 12, and he had to mourn in the full glare of the world’s media.

His wedding featured a hymn used at Diana’s funeral, at which he and William had walked behind her casket.

Sixth in line to the throne, Harry is one of the most popular royals, while Markle, a divorcee, is seen as a breath of fresh air for the monarchy.