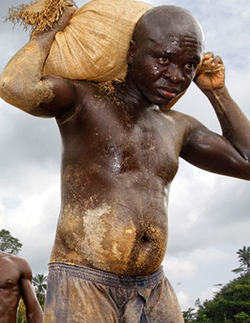 ARTISANAL gold miners can’t believe their luck. I for one did not see this coming, it is not common that you find ‘makorokoza,’ widely loathed for being a big environmental nuisance being elevated to number one hit team to fight our economic woes.
A ban on their activities appeared more likely, yet the honourable minister surprised by dedicating significant acreage in his budget statement detailing how they have just become a key stone in our economy. My humble opinion is that Honourable Finance Minister Patrick Chinamasa erred in this move. This story is nowhere closer to being the biblical stone that was cast aside only to become the corner stone – this stone is no corner stone for a reason.
Small timers are not going to take us anywhere, they lack greatly in every ingredient required to cause a leap in our gold output. Just the sight of the dimming glow of what once was the glitter in gold is good enough to see most to their demise. To put faith in this lot is setting us up for failure which we are least prepared to stomach at the moment.
I accept it makes sense to focus on an industry which makes up 20 percent of your GDP and delivers about 60 percent of your exports. Mining has been kind to Zimbabwe especially over the past 5 years when the little improvement that we managed caught the tail end of the commodities super cycle. Sadly we missed a whole decade before that when prices soared and fellow African economies maximised on the boom.
Gold in particular was very generous, finding its bottom at around $250 per ounce  some 14 years ago and rallying in a straight line to peak at $1,923/oz in 2011. Had we had our newly found zeal on gold mining then, Zimbabwe could have had an industry designed to mine gold at $250 and rode the wave all the way to the top, transforming our economy into a monster that we only can imagine of today. Instead, gold production slumped from the 27.1 tonnes produced in 1999 to 3.5 tonnes in 2008, an epoch rightly christened the ‘lost decade’ by local analysts.
I am certain that my view as regards artisanal gold miners being ill equipped to meet head on the challenges that gold producers face is shared by many. Capital is in short supply even for the bigger and more organised miners. There is no way small timers can have better access to capital than bigger miners, this is true for all industries not just mining.Advertisement

Bigger mines are grappling with challenges around antiquated and inefficient machinery; artisanal miners on the other hand have deficiencies in mechanising their processes. Modern technology is vital in bringing down unit cost of production even for big mines and failure to retool appropriately is a huge threat to the industry– a third of Zimbabwean mines are under threat if the Chamber of Mines is to be believed.
Lastly, mining epitomised an industry bearing the full weight of skills flight. The record commodity prices attracted our best minds in mining to countries with better working conditions. Big mines have acknowledged this gap, and if they are feeling the pinch, small miners ought to be suffocating from it. Small timers are simply not equipped to transform our gold production and do not have the stamina to survive the tsunami that is approaching.
The last time gold had a sustained bull run; its price rallied for 12 years and peaked in 1980 around $670. This was followed by a sustained bear trend which lasted two decades with the metal finding its bottom at prices below half the peak price. The latest rally lasted about 12 years and indications are that this has well and truly ended.
History may not repeat itself, but it is seldom a bad measure for what to expect in future and on that basis calling a sustained gold bear run is the simplest forecast around. This is corroborated by almost all commodity gauges; among them the Jefferson CRB Commodities index which has also turned bearish. This call goes to the core of the honourable minister’s strategy of uplifting makorokoza. Honourable Chinamasa relied on the World Bank produced forecast which forecast an average price of $1,380/oz at the end of 2013 and a gradual decline to $1,335/oz in 2018. Consensus has however formed around gold reaching even lower prices, and fundamentals certainly support that.
Where we are going, gold price will dance to the tune played by the world’s major economies, the US in particular. Gold has been gaining in popularity prior to the 2008 financial crisis which however acted to strengthen its allure owing to expectations a spike in inflation.
Central banks responded by throwing huge unprecedented cash injections to the crisis, which strategy was expected to brew inflationary pressures in developed markets. Investors scurried for insulation against inflation and piled into gold, the widely accepted inflation hedge. However, the inflation that gold enthusiasts have feared was dead on arrival.
The US inflation went nowhere and has since softened to below two percent. The quantitative easing that fuelled the inflation fears is already being tapered, from $85 billion in bond purchases per month to $75 billion. Gold miners elsewhere have also started hedging their risk by selling their production forward, which will effectively cap the price of gold, sending negative signal to the market at the same time.
Hedge funds and institutional buyers—the driving force behind much the huge demand in gold—appear to be abandoning as can be seen in their outflows from gold investments – their gold ETF holdings are at their lowest since 2008. Lastly, gold now has competition in the anti-establishment crowd from Bitcoin and other “virtual” currencies, which will water down its attraction as the only true universal money.
Gold thus appears to be headed in one direction, which is south. The only way one can survive is to become the least cost producer. This needs great ingenuity which has a tendency of following the skilled and knowledgeable in designing efficient mining plans. It requires efficiency often driven by technology which allows an ounce of gold to be produced at below the $1,250 that gold currently retails at. Not many big mines can achieve this and it is difficult to envisage a situation where artisanal gold miners can achieve this for sustained periods.
The above costs money to acquire and the $100m budget allocation, if it becomes available, will be just a drop in a lake. There appears, therefore, no plausible avenue through which small scale miners can eventually grow Zimbabwe’s gold output. Honourable Chinamasa recently spoke boldly about being practical and how that differs from matters of the spirit – very daring to say in a nation that is living in awe of miracle makers. Has he fallen for miracle gold? I wonder – but for a man of his intellect I am certain he hasn’t stooped so low.