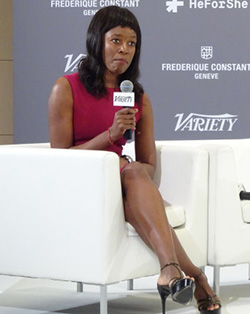 HeForShe, the global solidarity movement calling upon men and boys to help women achieve gender equality, took the world by storm when it launched a mere eight months ago.
Initiated by UN women and launched by ambassador Emma Watson, the campaign was grounded in the idea that gender equality is an issue that affects all people, and it shouldn’t be a struggle by women, for women.
Elizabeth Nyamayaro, head of HeForShe has been part of it from the very beginning.
Yet in January 2015, its success showed that an awareness campaign was not enough.
Something more concrete had to be done.
So, IMPACT 10X10X10 was launched in January, and in May 2015, 30 world leaders stepped up globally to support it. It was the movement that took HeForShe to a whole new level – a movement that would initiate change.
“When I was growing up in an African village, I saw the power dynamic play out in interesting ways,” Nyamayaro told HuffPost UK Lifestyle when explaining why the campaign was personal to her.
“Women did most of the hard work as you know but when it came to making decisions, that was really done by men,” she said.
“Fast forward a few decades later, I realised we need to not just look at the issue of gender equality as a woman issue, but understand the power dynamic still exists between men and women.”