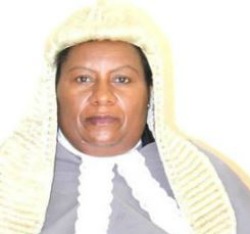 HIGH Court Judge Justice Loice Matanda-Moyo says she is surprised that after the leaking of Ordinary Level English Paper 2 last year, perpetrators at the Zimbabwe School Examinations Council (Zimsec) have not been fired or prosecuted over the scandal.
Justice Matanda-Moyo, sitting with Justice Priscilla Munangati-Manongwa, reserved judgement for Wednesday in a case where two parents whose children wrote the exam are challenging Education Minister Paul Mavima’s nullification of the 2017 English Paper 2 results.
The minister has ordered that the paper be rewritten this Friday.
Hearing arguments on the case on Tuesday, Justice Matanda-Moyo said the courts should send a strong message to the examination board that business was no longer as usual.
She said, “After the exam paper leakage, heads should have rolled. I am actually surprised that nothing has been done to those responsible for the leakages of the paper which should have been secured.”
“The Court should send a stern message to Zimsec that business is not as usual. We need to put a stop to this,” said Justice Matanda-Moyo.
Justice Munangati-Manongwa stated that it is unfair for those students who did not cheat to pay the price for a crime they did not commit adding it would be costly for parents to finance the rewriting of the paper given the short notice and lack of information availed to the students.
“Those who did not cheat should not pay the price for something they did not do.”
According to information presented to the judges by Lawyer, Tawanda Zvobgo representing the respondents, out of the 260 000 students who wrote the exam, a sample done by the exam board showed that 15000 students cheated during the exam.
One of the applicants travelled overseas and the parent is not in a position to bring the child back for the rewrite.
Zimbabwe Lawyers for Human Rights (ZLHR) member, Denford Halimani of Wintertoms, representing the two students, castigated Zimsec for failing to maintain high standards expected for school exams.
“The exam board is failing to maintain expected standards which have continued to decline over the years. This case is not isolated to the English Paper 2 for 2017, but even the mathematics paper as well,” said Halimani.
Mavima, then education deputy minister, once told parliament that leakages took place at the school level and not at Zimsec or in transmissions to district centres.Advertisement

The first Zimsec paper was written in 2002 after the ministry of Education localized the exams. Many think that since the introduction of Zimsec, the standards have greatly deteriorated.