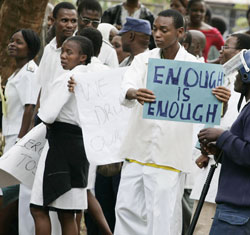 THE majority of right thinking Zimbabweans will agree with me that the state and nature of our politics in Zimbabwe particularly over the last two decades has had a profound negative effect on our health delivery system.
However I find it baffling that there seems to be reluctance by the ordinary citizen to link the two processes especially during election times.
Our pre-election period has not been characterized by any active debate on health care policy but rather sloganeering, directionless mass mobilization and divisive rhetoric by the political gladiators.
It can never be overemphasized that the quality of health care Zimbabweans get is by all means determined by the quality of the elected officials. It is my view that the political polarization in Zimbabwe has resulted in the electorate wearing dark lenses over the caliber, content and even capacity of most aspiring public officials.
An elected councilor for instance has a huge influence in the manner in which most council run clinics will conduct business in between the electoral cycles. The rural district councils are responsible for introducing or scrapping most user fees that we have seen mushrooming in primary health centers across the country. Parliamentarians have the unique opportunity to debate, amend or revise the public health act and other health related legislature. The parliamentary portfolio committees play an important role in providing oversight to the goings on in the health and child care ministry.
It is, therefore, clear that our health system is not only in the hands of the central government but even the officials we elect at the most basic levels of our governance systems. Other determinants to health such as the provision of clean water, refuse collection and the state of housing are also the prerogative of the very same elected local officials.
Isn’t it time that we start interrogating the substance of our forthcoming election candidates than to simply fall prey to the meaningless sloganeering, hero worshipping and directionless antagonism? If an aspiring councilor or parliamentarian cannot debate health policy for even a few minutes the blame on the resultant mortality and morbidity should equally be spread to the voter who put her or him in office.
The role of the ministries, cabinet and the presidium in driving health care policies can equally never be ignored. Without opinionating the reader a simple rewind to the period since the last election can give us the hard questions our current executive has to answer before even considering seeking a renewed mandate in next year’s plebiscite.Advertisement

There have been at least five crippling strikes by doctors, nurses and other health workers in the stated period over poor conditions of service. Cholera and typhoid cases have continued to ravage the nation with merciless propensity.
The chronicity of essential drug shortages and the ailments they treat seem to be on an irreversible competition. The few privileged workers with health care insurance have been reduced to the same status as the majority out of pocket medical subscribers as the ill regulated medical aid companies wantonly violate their legal obligation to delivering health financing in times of need.
This demise in the health care delivery system can best be testified by the very same public officials who are seeking reelection as they have flocked to neighboring and even distant countries to seek treatment for so called minor ailments.
Isn’t it irresponsible,  blatant ignorance or sluggishness of the thinking process to expect post-election improvement in your health care system from the same elite few who have spent millions of tax-payers’ money to be treated for minor sprains, out of the country?
The voter must urgently realize the importance of his/her ballot as an important cheque in accessing better health care and therefore must be cast wisely.
Food for thought!
Dr Nyamande is a Zimbabwean trained medical practitioner. He is the current spokesperson of the Zimbabwe Association of Doctors for Human Rights, past President of the Zimbabwe Hospital Doctors Association and current Hubert Humphrey Fellow in Public health policy and management at Emory University, Atlanta, USA.