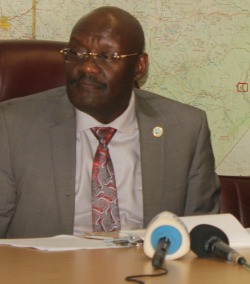 Government has collected $18 million since February this year through the $0, 05 levied on consumers per every dollar of airtime.
The levy on airtime, meant for drugs and equipment, was proposed in 2016 by Finance minister Patrick Chinamasa to compliment the shrinking Aids Levy, taxed on formally employed people who are now not more than two people in every 10.
Health minister David Parirenyatwa said the fund, which was at $8 million in July, has been useful in restocking the troubled health sector with critical medicines.
“Outside the drugs brought by donors, now we have the health levy fund. We are pleased that Natpharm stock levels are quite high. In the next few weeks the drug stock levels in provincial, district will be very high,” said Parirenyatwa during a tour of NatPharm this Wednesday.
The minister said the fund has also helped his ministry deal with stock outs of anti-retroviral drugs (ARVs) which had become synonymous with the sector which provides for a population of 1, 3 million.
“A quarter to half of the (NatPharm) warehouse is covered with ARVs so we have enough. The new drug TLE 400 is now here,” he said.
TLE 400 is the latest first line combination of tenolam, lamivudine and efivarenz which is more user-friendly and has less side effects.
He also admitted that, with the economy poorly performing, government was unable to fully finance health.
Although there has been an increase in the national budget allocation to health, the amount remains minimal compared to the sector’s requirements which, according to Parirenyatwa, require $1 billion.
Government allocation on health care continues to account for a relatively small share of total government spending with health sector allocation standing at 6, 9 percent in 2017 against a 15 percent Abuja target.
The Community Working Group on Health executive director Itai Rusike, in a post budget analysis paper, said, “While there has been a slight improvement in the health budget in 2018 it however still remains inadequate to fund the critical needs in the health sector.
“Moreover, the bulk of the resources will be channelled towards financing employment costs leaving very little for capital expenditures.”
Health was allocated $408 million from $208 million in the previous budget.Advertisement

Rusike said the actual disbursement to public health care amounted to $248, 6 million over the period January to September 2017, inclusive of $215, 1 million for employment costs for health care personnel (86, 5 percent of total actual disbursement).
Development partners have so far disbursed $279 million on health, more than what central government has spent.