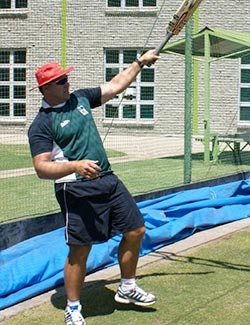 FORMER Zimbabwe captain Heath Streak has been appointed the country’s head coach after Dav Whatmore was sacked in June. Makhaya Ntini had been fulfilling the role in an interim capacity since May. But Zimbabwe confirmed on Tuesday that Streak had taken the role on a permanent basis. Former all-rounder Andy Blignaut, South African Peter Kirsten and Justin Summons were in cotention for the job too.
“For me, having captained this country, to be offered the post of head coach is a great honour,” Streak told a media conference on Tuesday.
Streak has been appointed by Zimbabwe keeping the 2019 World Cup preparations in mind with the huge task of getting qualified for the tournament. He will, however, continue his bowling coach role for Gujarat Lions in the IPL. Meanwhile, former South African fast bowler, Makhaya Ntini, will continue to stay as the bowling coach and Lance Klusener as batting consultant.
Streak has previously coached a few teams. He was in charge of the Bulawayo-based franchise Matabeleland Tuskers in the 2012-13 season when it won the Logan Cup. Streak was also Zimbabwe’s bowling coach between 2009-13 under Alan Butcher. He played a huge part in building up the Zimbabwe team for its Test comeback in 2011 and nurtured some of its best bowling talent including Kyle Jarvis and Chris Mpofu.
Over the years, Streak has remained committed to Zimbabwe Cricket, as he set up an academy in Bulawayo and was seen doing commentary during Zimbabwe’s home matches. Streak will be busy with upcoming tours which includes a two-Test series against Sri Lanka followed by an ODI tri-series which features West Indies as well.Advertisement