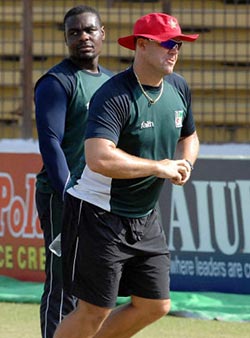 NEWLY appointed Bangladesh bowling coach Heath Streak has said that the country’s first-class cricket is in need of more wickets that ‘encourage pace and bounce’.
“First-class cricket, in my opinion, has to have a few more wickets that have a bit more pace and bounce to encourage some of the pacers a bit more,” he said.
“I think that the BCB (Bangladesh Cricket Board) have got a bit more control on these sort of wickets in first-class cricket as opposed to the Dhaka Premier League (the premier limited-overs club competition) that are privately funded.
“If you look back at all the records the quick bowlers don’t get enough bowling. It’s not that they don’t want to bowl, it’s just that the conditions don’t support them,” Streak told The Daily Star.
“For the quick bowlers there’s not much encouragement. Yes they have to learn to bowl in flat conditions, but that’s not how they should play in every game because they won’t get much incentive to bowl.
“And that’s because the wickets aren’t conducive, so we need to change that and get some wickets that have a bit more pace, especially at the venues that allow that. For example in Mirpur the groundsman can make a good bouncy wicket,” he added.
While the former Zimbabwe captain admits that it’s best for the Tigers to stick to their strength — spin bowling -he believes that there needs to be a fine balance between pace and spin for the betterment of the team.
Referring to India’s batting collapse against Bangladesh in the last series on seaming tracks that were unfamiliar to both the hosts and the visitors, Streak emphasised the importance of adapting to conditions.
“It’s not just for the bowlers but also the batters. There’s a technique to play in conditions with the ball swinging and seaming, we also need our batters to get exposed to those conditions.”
While the Zimbabwean did list the issues, there was no hint of frustration in him. He was, on the contrary, hopeful of a steady change.
“It’s something that we have discussed with the board and we will continue to work on; these things don’t change overnight, we just need to find a balance between spin and pace,” he said.
With the World Cup around the corner the current season would be the ideal time to bring about the change that Streak and several other players have long been yearning for.Advertisement

However, as the Zimbabwean himself put it, it would be impractical to hope for an overnight change.