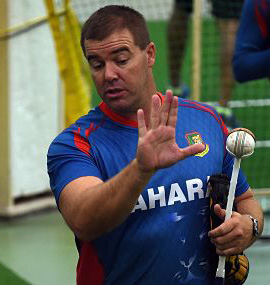 FORMER Zimbabwean fast bowler, Heath Streak, has expressed his desire to mentor the Indian Men’s national cricket team.
The pacer, who has a rich tally of 455 wickets in test and ODI format of the game, is also highly rated as a coach, having been part of Zimbabwe’s coaching staff from 2009 to 2013.
He was also Bangladesh’s bowling coach from 2014 to 2016, resulting in the tremendous turn of fortunes for the Tigers in world cricket.
He has also been credited for the rise of a bunch of young Bangladeshi fast bowlers in form of Taskin Ahmed and Mustafizur Rahman.
Having overseen the tremendous upturn in the Bangladesh cricket’s fortunes, Streak recently parted his ways with the Bangladesh Cricket Board.
Streak, who recently parted ways with the Bangladesh cricket, told about his wish of coaching the Indian team in a recent interview.
The Indian team currently do not have any permanent coach, after Duncan Fletcher’s resignation in 2015 and speculations are going around about the possible contenders.
The BCCI, which saw a splurge of changes recently, with Anurag Thakur taking over the organisation’s helm as the President, issued the guidelines for the high-profile job.
Among those, one prominent clause has been the knowledge of Hindi and other regional languages.
Ravi Shastri, Bharat Arun and Sanjay Bangar, who handled the mentoring responsibilities of Indian team from post-World Cup 2015 to the recently concluded World T20 2016, are all set to apply again for the job.
Also Sandip Patil, the present head of the Selection Committee has submitted his application for the coaching job.
Had Streak applied for the job, he would have been eligible for one of the most lucrative posts in cricket.
Streak, who was IPL side Gujarat Lions’ bowling coach, also informed about his next move, working towards the head coaching position.
BCCI all set to pick the next coach of the Indian team at 24th June, ahead of the team’s crucial West Indies tour next month.
About the India-Zimbabwe Series
The former captain of Zimbabwe, also spoke about Zimbabwe’s chances in the upcoming ODI series against a new-look Indian side.
He feels,
“If the Indian youngsters carry on with their IPL form then they’ll be a tough side to beat for Zimbabwe. However, experience is a factor and we have seen young teams when put under pressure struggle a bit. MS Dhoni’s presence – to have his guidance and leadership – will be a calming influence no doubt, making India a tough team to beat. But Zimbabwe will be playing at home, will be aware of their conditions and they might just be able to spring a surprise.”Advertisement

The rising star of Bangladesh cricket, Mustafizur Rahman made his debut in Streak’s tenure and has gone on to achieve unprecedented heights with his exemplary performances. The left arm pcer’s assortment of enigmatic variations has got the better of most experienced batsmen and left them dumbfounded.
Streak had a word of caution for the youngster,
“People will improve and will find ways to counter his skills. Definitely, that will happen but like all bowlers, he too will find other methods that he can use against batsmen, just like we see batters come up with new shots to counter certain kinds of deliveries. Hopefully, he continues to improve because if you stagnate in today’s age, you’ll get left behind by the competition.”