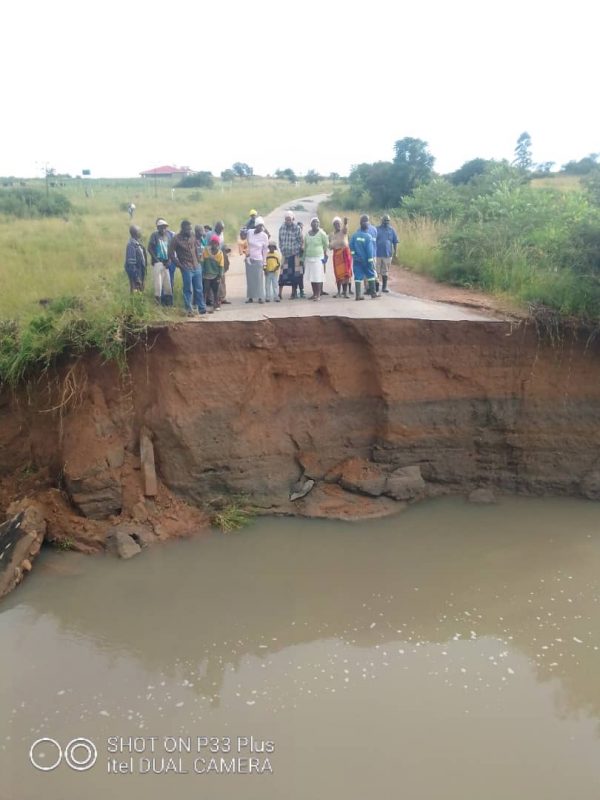 Villagers take a look at the swept away Mwarazi Bridge in Headlands, Manicaland province
Spread This News

THE government has issued a warning to road user to exercise caution after the continuous rains pounding across the country have left a trail of destruction with bridges are swept away while debris is blocking roads in some areas.

While farmers continue to celebrate the abundant rains which will guarantee the drought-prone Zimbabwe will have a bumper harvest, the heavy downpours experienced some parts of Zimbabwe have left a trail of disaster with some roads and bridges having been swept away.

Motorists and other road users have been left stranded.

Information Permanent Secretary Nick Mangwana warned motorists to watch against rock falls which are now common in some areas due to heavy rains.

“Heavy rains that fell in Kariba since yesterday (Friday) have led to land and rock falls that have blocked the road from Harare turnoff to Heights suburb. Kariba received 53mm and more is forecast. Drivers are cautioned to drive with caution as rock falls are now commonplace here,” Mangwana said in his alert Saturday.

He added that in Headlands, Manicaland province, the government had been called to assist villagers after rains swept away Mwarazi Bridge and an alternative route is being created.

“Mwarazi Bridge on the Headlands Mayo-Chikore Road was swept away. Authorities are working on a detour. Drivers urged to exercise caution,” Mangwana said.

The floods affected homes are in Chiedza, Claudia and Chikangwe suburbs. The residents have urged council to clear the drains to prevent flooding as more heavy rain pound the farming town.

The Meteorological Services Department advised citizens across the country to take precautionary measures as more rains are expected.

“Masvingo, southern areas of Midlands, and southern districts of Manicaland provinces are expected to be under cloudy, drizzly and rainy conditions which should lead to a drop in daytime temperatures.

“Matabeleland North, Bulawayo Metropolitan, northern areas of Midlands, all Mashonaland provinces, Harare Metropolitan province and northern districts of Manicaland province should be mostly cloudy with widespread thunderstorms and rain. Heavy rainfall in excess of 50mm cannot be ruled out especially over high ground,” the department said in a statement.