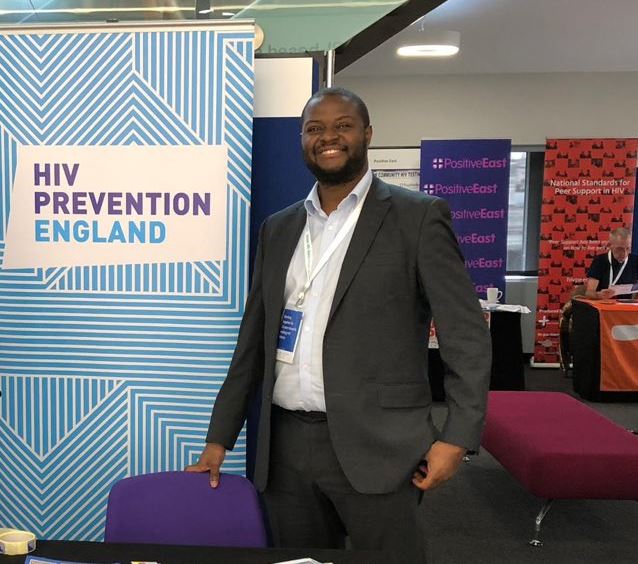 Takudzwa Mukiwa is the Head of Social Marketing for Britain’s leading HIV and Sexual Health charity Terrence Higgins Trust – and this summer he’s inviting you all to play your part in stopping HIV in its tracks.

Recently at African Nations Cup UK, (which Team Zimbabwe UK won), I was discussing HIV prevention methods with lots of people and it was clear that not everyone is aware of the advances made in HIV prevention. If we are to stop HIV, everyone should be aware of all the options available because HIV prevention is now more than just condoms. It includes PrEP, treatment and testing.

Unfortunately, HIV is still a very big problem within the black African community. For the last few years we’ve been one of the communities most affected by HIV in the UK. According to recent statistics, black African people accounted for 39% of all heterosexuals diagnosed with HIV in 2017. Things are improving but they can definitely improve faster if we all play our part.

I’ll lay out the tools we now have to stop HIV and you can choose how you play your part. At the very least start a conversation with friends or family to make sure all the people you know are aware of the options.

PrEP (pre-exposure prophylaxis) is a pill taken by HIV-negative people before sex that reduces the risk of getting HIV.

Although Zimbabwe has about 9,000 people using PrEP currently, many of us still know nothing about the HIV prevention pill.

Taking PrEP before being exposed to HIV means there’s enough drug inside you to block HIV if it gets into your body – before it has the chance to infect you. The drugs used in PrEP are the same drugs that are prescribed to thousands of people living with HIV every year. They’re very safe and serious side effects are very rare.

PrEP is available free for black African women and men from some sexual health clinics as part of the PrEP IMPACT trial in England.

Some people are also ordering PrEP online. You can find more information from I Want PrEP Now..

To stop HIV we have to make sure that anyone who has HIV is aware of it. This is because most people get HIV from someone who doesn’t know they have it. – the only way to be sure is to get tested.

Testing for HIV is free, fast and most importantly confidential; you can now even do it at home.

If you have HIV, the sooner you find out you have it, the better it is for your health. You can start treatment and it is much less likely to have a negative impact on your health or the length of your life.

You can get tested for FREE at local drop in and community clinics regardless of your citizenship and immigration status.

Choose how you want to get tested.

If diagnosed with HIV thanks to treatment you can not only live a long healthy life, but you also can’t pass it onto others.

Scientists and doctors have confirmed that someone living with HIV, on treatment, with extremely low levels of the virus in their blood (undetectable viral load), cannot transmit the virus to someone else sexually, even if condoms are not used during sex.

HIV treatment is free of charge in the UK to all who need it, regardless of citizenship or immigration status.

Everyone knows about condoms, so I’ll spare you the details. However, what some people don’t know is that condoms come in different materials and sizes. It’s all about finding the condom that’s right for you.

To find out more about how you can protect yourself and others from HIV visit It Starts With Me.