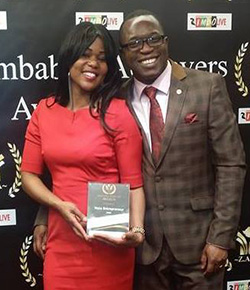 THE Zimbabwe Achievers Awards(ZAA) rolled out another spectacular event on Saturday 7th May when they hosted the sixth annual awards gala in London.
Hundreds turned out to celebrate the achievements of this year’s nominees and winners.
Held at the five-star Royal Garden Hotel in Kensington, the awards, which ran under the theme Celebrating Women in Media and the Arts honoured five women excelling in the media, music and the arts industry.
Head of Publicity for Columbia Records, Sony Music Entertainment, Taponeswa Mavunga, Forbes’ Farai Gundan, award-winning writer Petina Gappah and actress Chipo Chung were among the women who received the Chairman’s special recognition award for making remarkable, consistent and outstanding contributions to the Zimbabwean community in the UK and abroad.
In her speech, ZAA Chair of the Panelists, Martha Chinouya hailed the work that the ladies were doing and the barriers they have broken in the industries that they are in.
“It is not easy to be a woman, let alone a woman who holds a very high position in fields such as media, music and film; and we celebrate these women who are breaking the so-called glass ceiling and emerging as powerful and influential women in their various industries,” said Chinouya.
The Chairman’s Honorary Award for contributions to charitable causes and children’s welfare went philanthropist and social entrepreneur Tsitsi Masiyiwa.
ZAA Chairman Conrad Mwanza saluted Masiyiwa’s humanitarian work and how she continues to positvely impact the wider community.
“Mrs Masiyiwa’s work is admirable and truly inspiring. We can all certainly learn something from her, and we can all make a difference and contribute to building a community that we are proud of, and a nation that that we have all envisoned,” Mwanza said.

Diaspora Funeral Cash plan and CEO of NewZimbabwe.com (left) and his wife