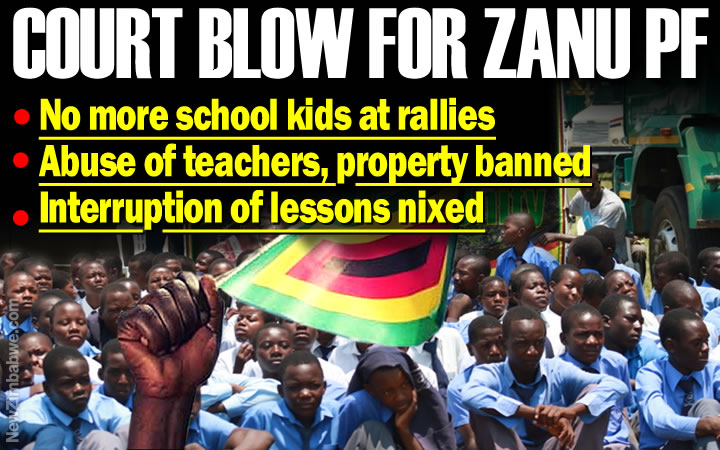 Veritas recently engaged lawyers Doug Coltart of Mtetwa and Nyambirai law Firm on behalf of Amalgamated Rural Teachers’ Union of Zimbabwe (ARTUZ) where Zanu PF was challenged for forcing school authorities to provide transport and other services for its supporters to rallies as well as forcing school children to attend political rallies.

In some cases, children were asked by the party leadership to provide labour in the form of carrying benches and chairs from classes to places where rallies would be held.

According to ARTUZ, all this resulted in cancellation of classes, thereby prejudicing children of learning hours.

The ruling party and the ministry of Education were respondents in the matter and an interim court interdict was granted by Justice Mafusire in the presence of Zanu PF and ministry of Primary and Secondary Education.

However, it was heard that Zanu PF tried to block the case by citing technicalities in the application but the court dismissed the excuses ordering that the application was urgent and must be heard without delay.

The ban on bussing school children comes after many called for it following a bomb blast which killed two people during a rally addressed by President Mnangagwa last weekend.

Meanwhile, ARTUZ has urged its members to wear Red this Friday in celebrating its court victory.

“Wear Red and celebrate the victory,” read part of ARTUZ statement on Thursday.

In July 2017 the union ZANU PF and its then First Secretary, Robert Mugabe, as well as then Secretary for the Women’s League, Grace Mugabe to the Zimbabwe Human Rights Commission (ZHRC) for rights violations.
ZANU PF and the two Mugabes had been responsible for a series of violations of fundamental human rights set out in the Chapter 4 of the Zimbabwe Constitution. Chapter 4 sets out the fundamental rights and bounds the state, its agencies and every person including juristic persons to respect, protect and uphold.