VISUALLY impaired Midlands State University (MSU) student, Mavis Tshuma has received a timely donation of a special high-tech laptop, a smart phone and walking stick, all valued at over $500 000 to help her adapt to campus life.

The laptop, installed with Jaws Professional software, will allow the 27-year-old Sociology student to operate the computer using audio commands, making it easy to navigate between applications.

The equipment was sourced by Zimbabwe Newspapers Group (Zimpapers).

At the weekend, lnformation, Publicity and Broadcasting Services deputy minister, Kindness Paradza, handed over the laptop, a brand new A31 Samsung smartphone and a walking stick to the second-year MSU learner at her home in Makonde constituency.

The kind gesture followed an appeal for donations that was aired on the state broadcaster, ZBC TV.

Paradza lauded the diversified media company for the donation which will make life easier for the visually impaired student.

“After watching the heart-touching story of Mavis on ZBC TV, Zimpapers, through its board chairperson Tommy Sithole and chief executive officer Pikirayi Deketeke, procured the gadgets valued at over $500 000 from South Africa.

“The special utility laptop is going to be handy in her studies, as she desperately needs it,” said Paradza, who was flanked by his Zanu PF district coordinating committee officials. 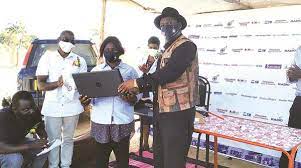 Accepting the donation, Tshuma said studying was a huge challenge and hopes the donation will help ameliorate the burden.

“The computer and the cell phone are going to make it easy for me to study. We only had two such kind of computers at MSU and it was a huge challenge for me and other visually impaired students to study,” said Tshuma.

He pledged more interventions to improve communities and their inhabitants.