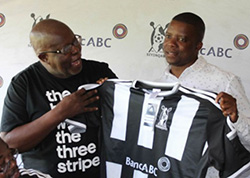 NEW Highlanders coach Bongani Mafu, whose appointment was confirmed Tuesday, has said he is aware of the challenge he faces at the Bulawayo giants back which involves rekindling their glory days.
Mafu signed a one year contract and will be assessed at the end of the season if the set targets, which are to win back the hearts of the Highlanders family and not necessarily the league title, are achieved. He takes over from Kelvin Kaindu.
The former Zimbabwe Saints coach and holder of a Uefa B Licence badge like his predecessor Kaindu, will announce his backroom staff in the New Year, although former Bantu Rovers coach Mandla Mpofu is likely to join him.
Besides the Uefa B Licence, Mafu also has a German International Licence and a Zifa Level IV coaching certificate.
Also in line for a job at Bosso is Tembo Chuma as goalkeepers’ coach who was in the same position in 2013 before moving to ZPC Kariba.
ZPC Kariba manager Patson Ndabambi is also likely to join Highlanders in the same capacity as Bosso seek a fresh start.
Speaking at the unveiling ceremony on Tuesday, Mafu said: “I have been in the game for a long time, having coached locally, in Botswana and in Europe.
“I appreciate the pressure that comes with coaching Highlanders but I embrace the challenge. We have to change the players’ mentality into knowing that football is work.
“I believe we have good players. What we have to change are ideologies, behaviours and approaches to make out the best possible.”
In an earlier interview, Mafu said he needed young players to bring back glory to Bulawayo giants.
“I need vibrant, tactical and technically aware players whose performance on the pitch will suit and meet the needs of a team like Highlanders. We cannot have passengers.
“The younger you are the better in sport. You cannot keep one up to the age of 28. You need to be young and vibrant. Personally I think a good 23-year-old boy is almost a senior player. From 18 to 23, I think that’s when you can get the best out of them.
“But I have never been afraid to put a 17-year-old on the field if he has got the right body size, the right mental attitude. If I come, in it will not be a total reshuffle per se; I think there are good players.
“Obviously you need to check at age, there are players who need to go and take a rest but there may be some that you need.”Advertisement

Highlanders chairman Peter Dube said Mafu fitted well into the club’s thrust to revive their famed junior policy.
The thrust has, in the past, produced the Ndlovu brothers, the late Adam, Madinda and Peter, the late Benjamin Nkonjera, Mackay ‘Ninja’ Nyathi, Honour Gombami, Thulani ‘Biya’ Ncube and Methembe Ndlovu, among others.
Highlanders opted for a local coach after their principal sponsors BancABC cut funding by 43 percent for next season forcing the club to cut all their expenses by 43 percent by the same margin. In the 2014 season, Highlanders received $700,000.
Reducing costs means players will also be affected with a number of senior squad members already out in the cold.
Mthulisi Maphosa, Hillary Madzivanyika, Charles Sibanda, Simon Munawa, Joel Ngodzo and Njabulo Ncube will not be at the club next season.