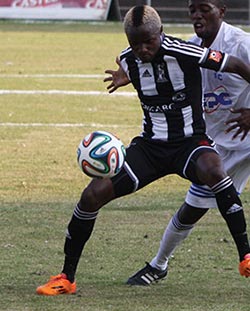 Highlanders 1-0 Harare City
Shabanie Mine 3-0 Chiredzi FC
KUDA Mahachi scored a stunner as Highlanders returned to the top of the Castle Lager Premier Soccer League on Thursday after narrowly defeating troubled table anchors Harare City at Barbourfields Stadium.
After a rather dull first half, it took only 10 minutes of the second half for Mahachi to have the Highlanders faithful celebrating.
Getting the ball from an acute angle, Mahachi deftly chipped the ball into the goal, leaving the Harare City goalkeeper clutching thin air as he had anticipated the ball to sail over the bar.
Highlanders now top the league table with 16 points, the same as How Mine, who beat Caps United 2-0 on Wednesday. City, struggling with boardroom problems, remained at the bottom of the log after one win, seven losses and just three points.
At Maglas, Shabanie Mine maintained their unbeaten home record, thumping Chiredzi Football Club 3-0.
Daniel Chakupe scored twice – first a left footed scorcher in the 32nd minute when he was allowed space inside the box. He completed his double in the 69th minute tapping home a rebound after the Chiredzi goalkeeper had blocked his initial effort.
Then Godknows Murwira put the icing on the cake with a drive from outside the box for Shabanie’s comfortable win.
The hosts though finished with 10 men after Allen Tavarwisa was given his marching orders in the 44th minute, but still Chiredzi were too blunt to take advantage.
With the win, Shabanie Mine moved into sixth place, displacing Dynamos, who dropped to seventh after the controversial referee-aided 1-0 win over FC Platinum on Wednesday.
Shabanie coach John Phiri was happy with the win.
“I am happy for the boys, they did very well. But I though the red card was too harsh for my player,” Phiri said after the match.
Moses Chunga, the Chiredzi coach, was not impressed with his charges as he prepares to face his former side Dynamos on Sunday.
“We played like amateurs. They were one man down but we did not take advantage of that. Now we have to go back and prepare for Dynamos,” the former Warriors midfielder said.
FIXTURES
SATURDAY:  Caps United v Bantu Rovers (NSS), Chicken Inn v Chapungu (Luveve), Triangle v FC Platinum (Gibbo)
SUNDAY: ZPC Kariba v How Mine (Gwanzura), Buffaloes v Highlanders (Sakubva), Hwange v Shabanie Mine (Colliery),  Chiredzi v Dynamos (Chishamiso), Black Rhinos v Harare City (Rimuka)Advertisement