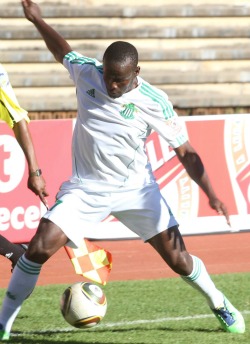 CAPS United, bidding for a top four finish, registered a comprehensive 3-1 victory over rivals Highlanders in a Castle Lager Premier Soccer League match at the National Sports Stadium on Sunday.
The victory helped them ease into fifth position on the league table.
Highlanders showed so much verve and gave a scare with Obadiah Tarumbwa’s long range low drive going just wide four minutes into the match.
However forward Phineas Bhamusi broke the deadlock on 36 minutes- bursting into the penalty area and then unleashing a low ground shot that beat goalkeeper Ariel Sibanda.
But the Bulawayo giants levelled matters on 52 minutes with Knox Mtizwa planting a downward header into the nets off a cross by Teenage Hadebe.
In the 56th minute, Chitembwe hauled off Moses Muchenje and threw in Dominic Chungwa with Amini Soma Phiri responding by pulling off Mthulisi Maphosa and introducing Nqobizitha Masuku on 60 minutes.
Three minutes later, Caps United made it 2-1 as Leonard Tsipa got to the end of a cross from Dominic Mukandi to side foot the ball into the net.
Chitembwe’s substitution at the death when he brought in Equatorial Guinea striker Antonio Fugo for injured Tsipa worked wonders.
Fugo, in his first touch, showed composure to set up Chungwa who put some gloss to the score line with an equally calm finish.
The victory eased Caps United to fifth position on the league table with 37 points, and if they maintain the form, a top four finish is within reach.
So happy were the fans that they said their team was ready to face bitter rivals Dynamos.
Chitembwe, who received a standing ovation at the end of the match, was delighted with the victory.
“I thought the technical application and tactical application contributed to this victory. We showed more desire than our opponents.
“I cannot say we are ready to meet Dynamos at this stage, we are still improving. The ultimate goal for Caps is to try and be champions. I have got a good working relationship with Mark Mathe.
“I doubted him at first when I joined but we are working very well and has helped us with inside information about Highlanders,” said Chitembwe.
His counter-part Soma Phiri blamed his charges for letting in soft goals and said they need to work hard.Advertisement